An expert on EU-Russian relations tells DW that the Crimean crisis didn't come as a surprise. After the eastern expansion of NATO, Russian insecurity was predictable, but the West ignored Putin's warnings. 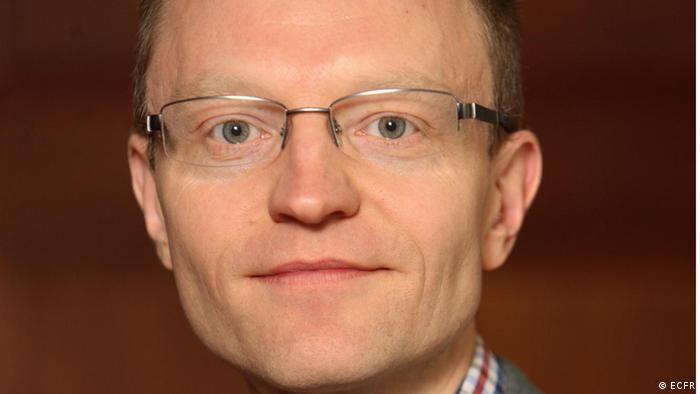 Ten years ago, in March 2004, several former members of the communist Warsaw Pact joined the Western military alliance NATO. With that new round of expansion - including the Baltic states of Estonia, Latvia, and Lithuania - NATO for the first time shared borders with Russia. Since the Cold War ended, the Western alliance has gained 12 new member states in Eastern Europe, so that it now has 28 members in total. For several years, Ukraine has also been expressing an interest in becoming a member. This policy changed in 2010 with the pro-Russian presidency of Viktor Yanukovych. DW spoke to Stefan Meister of the European Council on Foreign Relations about relations between NATO and Russia.

DW: How much has the enlargement of NATO determined the Crimean crisis?

Stefan Meister: I think it is one of the key factors. The first point is that the Russian Ukraine policy has failed. Russia has lost its influence on Ukraine. With Viktor Yanukovych it has lost its main partner in Kiev. This really caused alarm in the heads of the decision makers in the Kremlin: they felt that, with this development in Ukraine, they would eventually also lose Ukraine to NATO and then NATO really would be knocking on the gate.

With Russian disapproval of an expanding NATO, was the conflict over Crimea foreseeable?

It’s always difficult to say after the events that everything was clear before. But sure, with Putin's Munich speech in 2007 and with the discussion about a further NATO enlargement in Ukraine and Georgia in 2008, the Russian leadership has sent signals that this is the red line and that they will respond to this red line. They tried to respond in a soft power way in the last years and they have now understood that soft power is not sufficient, that Russia has no soft power. So they had to switch to hard power and took Crimea as a tool to influence Ukrainian policy. In this sense, we haven't listened to the Russian leadership. We have just ignored Putin in his speeches.

How does a constantly expanding NATO influence European-Russian relations?

For Russia, the EU is no security institution. What Russia really perceives is that there is a link between EU enlargement and NATO enlargement. And if one happens, the other will also happen. In this sense, a deeper integration of the EU is a threat to Russia. This has made it more difficult to cooperate with Russia and it has also increased Russian resistance against any EU rapprochement of the common neighborhood of post-Soviet states. The EU is more and more perceived as a competitor in the post-Soviet region because of this background of NATO enlargement and the security threat.

How big a role is Germany playing in the current conflict?

It is the main power in Europe and it is seen by Putin and the Russian leadership as the key player in Europe with whom to talk and with whom to maybe make a deal at some point. I wouldn’t overestimate the influence of Angela Merkel in German policy on Russia. But if someone has influence, if someone is heard in Moscow, then it is Berlin. There will be no tough sanctions, no common EU policy on the crisis without Germany.

Stefan Meister is a Senior Policy Fellow at the European Council on Foreign Relations. He has published extensively on EU-Russian relations and has been an election observer for the OSCE on several occasions.

You knew that even 25 years after the fall of the Berlin Wall nothing concentrates the Western mind like a Soviet style land grab in Eastern Europe. Your power play does what we couldn't: Revive our two key projects. (21.03.2014)

Credit ratings agency Fitch has revised down its outlook for Russian debt to mirror the potential impact of sanctions. The move is a first step towards a full ratings cut, but Moscow claims there is no basis for it. (21.03.2014)