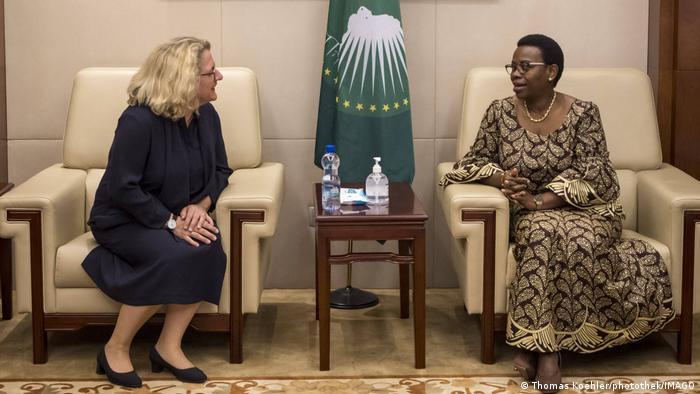 The war in Ukraine may be thousands of kilometers away, but it is hitting people in Addis Ababa, Ethiopia, with full force. Food prices are skyrocketing — particularly for staples including bread and vegetables.

"Every percentage increase in food prices leads to at least 10 million more people in the world falling into poverty, into hunger," said German Development Minister Svenja Schulze on a trip to the Ethiopian capital to promote a global alliance for food security.

"In Africa, too, the dramatic consequences of Russia's war of aggression are palpable and painful. When food and energy become more expensive, it exacerbates existing hunger crises," the minister added.

Schulze arrived in a country where several disasters have collided: Not only is the COVID-19 pandemic still raging, Ethiopia is suffering its worst drought in decades — climate change has made the typical rainy season either much shorter or virtually non-existent. And when the rain does fall in these conditions, the ground is unable to absorb all the water and destructive floods can come quickly. Moreover, a recent plague of locusts has devastated crops in several regions of the country.

"These crises are becoming increasingly brutal and complex," said Matthias Späth, German NGO Welthungerhilfe's regional representative for the Horn of Africa. "These are unbelievable conditions. People are plunged into new crises year after year without being able to recover in the meantime." They are exhausted, he said.

In northern Ethiopia, in the Tigray region, a bloody conflict is further weakening the country. In a meeting with Ethiopia's Prime Minister Abiy Ahmed, who observers have blamed for fomenting the civil war, Svenja Schulze said she urged him to make progress on the human rights situation in Tigray.

Already, 25 million of Ethiopia's 112 million inhabitants cannot ensure their own survival and are dependent on aid. The Russian war in Ukraine is further exacerbating the extremely tense supply situation in the country and throughout the region.

"Resources are now becoming scarce everywhere," said Späth. Normally, Welthungerhilfe in Ethiopia invests 80% of its aid money in long-term projects and the remaining 20% in rapid emergency relief. "But that is shifting dramatically now. We are approaching a 50:50 percent ratio," he added.

Späth feared that the effects of the war in Ukraine will be felt even more bitterly in the region in the coming months. "The aid deliveries that are being brought to Tigray and other regions — there's a Ukraine label on every sack of grain…At the same time, markets for food and fuel are collapsing in the face of skyrocketing prices."

Other aid organizations in Ethiopia are also now under enormous pressure. "We fear that we don't have sufficient resources for the many troubled areas around the world," said Ute Klamert, executive director of the United Nations World Food Programme (WFP).

The consequence of this, she says, is that food rations have to be scaled down. "At the moment, we already have to cut them in half in seven countries. For example, in Kenya, the Central African Republic and Yemen. In some cases, these are food restrictions of up to half the previous rations, for each family per month," she said.

The United Nations Children's Fund (UNICEF) provides food packages to severely malnourished children in Ethiopia. "The price of these has gone up 10 to 15 percent in the last three months," said Michele Servadei, deputy director for UNICEF in Ethiopia. "This is having a significant impact on our budget. So, we will have to significantly reduce the number of aid deliveries if we don't get funding elsewhere."

In the end, he said, it is the children who suffer.

This is partly the reason why Minister Schulze made a stop during her trip to the African Union (AU) headquarters in Addis Ababa to promote a global alliance for food security.

Concerns about increasing food prices are high in the AU, she said after her talks there. "Many countries in Africa rely on subsidized bread prices. But because many countries are too deeply in debt, that policy had reached its limit," Schulze said.

"And if bread is then no longer accessible to large parts of the population, then the countries fear further unrest. Then they fear protest and thus destabilization," she added.

A ray of hope

In the long term, the African Union's goal is to produce more food itself and to grow crops that are adaptable to climate change.

As example of this can be seen at the World Bank urban gardening project in the middle of Addis Ababa. Surrounded by high-rise buildings and steep slopes left by massive landslides, a green oasis has emerged. A terraced small-scale farm has been installed here, where vegetables can grow despite erosion. The project also employs a number of women and young people, training them to provide for themselves and their families.