Vladimir Putin: 'Israeli jet did not shoot down our plane' in Syria

Russia's Vladimir Putin has taken a more conciliatory tone, after his Defense Ministry held Israel "completely" accountable for a jet shot down over Syria. Putin spoke of "a chain of tragic accidental circumstances." 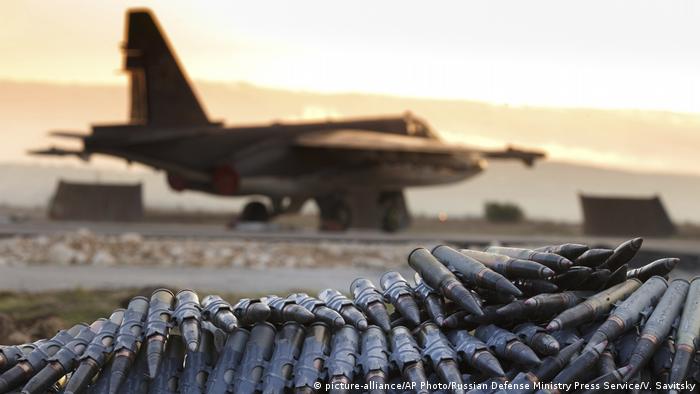 On Tuesday, President Vladimir Putin rowed back from his Defense Ministry's highly critical initial responses to the downing of a Russian military jet being over Syria by regime forces.

Putin told reporters on Tuesday that it looked like "a chain of tragic accidental circumstances" had caused the incident, adding that "an Israeli jet did not shoot down our plane."

"No doubt we should seriously look into this," Putin said, speaking at a news conference after talks with Hungarian Prime Minister Viktor Orban.

Putin said Moscow would increase security for Russian military personnel in Syria as a response. "These will be the steps that everyone will notice," he said, without elaborating.

'Blame ... completely lies on the Israeli side'

Russia's Defense Ministry had taken a far tougher stance at first, saying Israel caused the reconnaissance jet to be shot down.

"The blame for the downed Russian plane and the death of its crew completely lies on the Israeli side," Defense Minister Sergei Shoigu said in a statement signed off on by Putin.

According to the ministry, the Il-20 reconnaissance aircraft was shot down on Monday with its 15 service members on board during an attack by four Israeli F-16 jets on the coastal city of Latakia, near the Hmeymim Air Base.

On his channel on the social media platform Telegram, Chechnya's leader, Ramzan Kadyrov, commented: "Israel's leadership always talks about the high level of friendship with Russia. But that all remains just words if in reality such tragic incidents take place — and the actions of the militaries in such a tense region of the world ... aren't coordinated."

Although by no means allied in their military activities over Syria, Russia and Israel do tend to warn each other of any sorties in a bid to avoid mishaps.

Israel's military placed the blame on Syria. "Israel expresses sorrow for the deaths of the aircrew members of the Russian plane that was downed tonight due to Syrian anti-aircraft fire," a statement read.

"Israel holds the Assad regime, whose military shot down the Russian plane, fully responsible for this incident. Israel also holds Iran and the Hezbollah terror organization accountable for this unfortunate incident," the statement continued.

The Russian military claimed that Israeli pilots had attacked Syrian targets by using "the Russian plane as a cover, exposing it to fire from Syrian air defenses." According to Moscow, the Israeli planes intentionally flew above the larger Russian jet to shield themselves from anti-aircraft fire.

Israel also disputed these claims, saying in a statement that "during the strike against the target in Latakia, the Russian plane that was then hit was not within the area of the operation."

It added that "when the Syrian army launched the missiles that hit the Russian plane, [Israeli] jets were already within Israeli airspace."

"Extensive and inaccurate Syrian anti-aircraft fire caused the Russian plane to be hit and downed," the statement continued.

An anticipated Syrian government offensive against the jihadi hotbed of Idlib province threatens to draw in multiple foreign powers and unleash massive suffering. Hundreds of thousands of civilians could be displaced. (30.08.2018)