Despite censorship and the government's crackdown on anti-war protests, some Russians have come up with alternative ways to speak out against the invasion of Ukraine. Here are some instances that went viral. 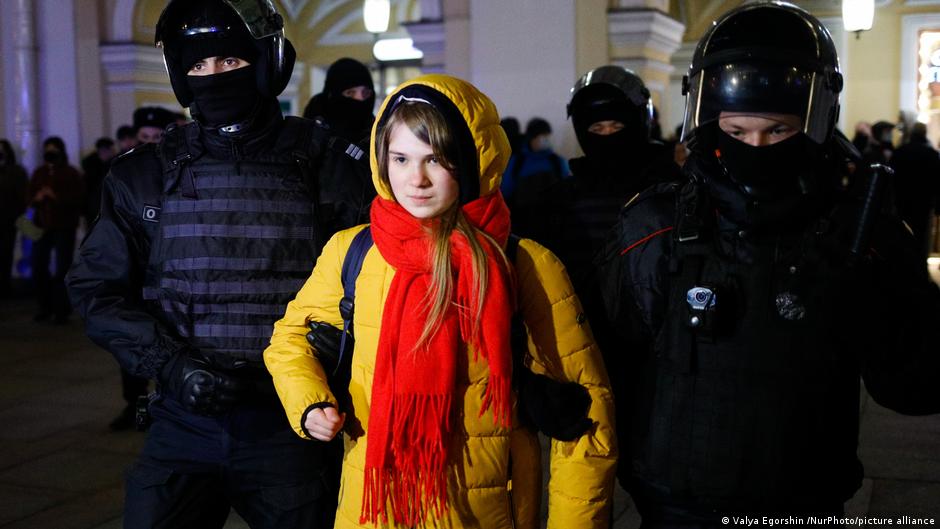 Thousands of Russian, including minors and the elderly, have been arrested for protesting against the war in Ukraine.

Since Russian President Vladimir Putin ordered his troops to invade Ukraine three weeks ago, the police forces in Moscow and other cities have been cracking down on anti-war protests.

The Kremlin has restricted Russians' access to Facebook, Instagram and Twitter to prevent the reports and images of war from reaching them. Media are banned from using the terms "Invasion" or "war" to describe what Putin is doing in Ukraine. Instead, they have been ordered to refer to it as a "special military operation."

Regardless of these measures, thousands of anti-war protesters have rallied across Russia since the war started, risking consequences such as fines, detention and imprisonment.

On March 4, the government implemented a set of rules to criminalize anti-war protests and independent reporting. According to Human Rights Watch, the laws make it illegal to spread "fake news" about the Russian armed forces or call for an end to the deployment. People who disobey can face up to 15 years in prison.

But, as the authorities' tolerance for demonstrations and rallies shrinks, activists continue to protests against the war in Ukraine in various ways.

"No to war" on TV screens

Marina Ovsyannikova, an employee of a Russian state TV station,  interrupted a live news program on Monday, chanting "Stop the war!" She held up a cardboard sign that featured the Russian and Ukrainian flags and shouted: "Don't believe the propaganda. They're lying to you." Seconds later, the program was cut off.

In a video, recorded before her protest, Ovsyannikova urged Russians to join protests against the war and expressed regret for her part in spreading "Kremlin propaganda."

"Russia is the aggressor country and one person, Vladimir Putin, solely bears responsibility for that aggression," she said in the prerecorded video.

Ovsyannikova was arrested minutes after she stormed into the studio. She was released from custody on Tuesday and fined about 30,000 rubles (around $270). But she still awaits her trial, where she could receive a prison sentence.

A video went viral on social media last week, showing a woman being arrested by the Russian police for holding up a small piece of paper that reads "two words."

The phrase "two words" ("два слова" in Russian) seems to hint at the forbidden slogan "no to war" (or "нет войне" in Russian).

In the video, the woman asks the cameraman "If I just say 'two words,' will I be arrested for it?" She then shows a small piece of paper with the phrase "two words," written on it. Seconds later, heavily-armored security forces swoop in to arrest her.

Another woman approaches the camera right after and tries to explain why she supports the war against Ukraine — but before she can finish her sentence, policemen grab her and pull her away too.

Russian police have arrested demonstrators who protest with blank signs. A video that receive millions of views on social media, showed a woman holding a blank sign among a group of people before police officers approached her and escorted her away from the crowd.

The incident was not an isolated one. According to OVD-Info, an independent media project that monitors human rights and political persecutions in Russia, another activist called Anastasia Nikolaeva spent eight days in detention for protesting with a blank sign in the southern Russian city Rostov-on-Don.

In another viral post, a Russian pilot is seen denouncing his country's war on Ukraine during a flight. "I think sensible citizens will agree with me and will do everything to make it stop," the pilot addressed the passengers.

On March 1, photographs emerged on social media showing primary school children behind bars. Novaya Gazeta, the Nobel prize-winning independent newspaper, confirmed the pictures and said the kids had been arrested along with their parents for laying flowers at the Ukrainian embassy and holding signs saying "No to war." They were reportedly released as the lawyers arrived. 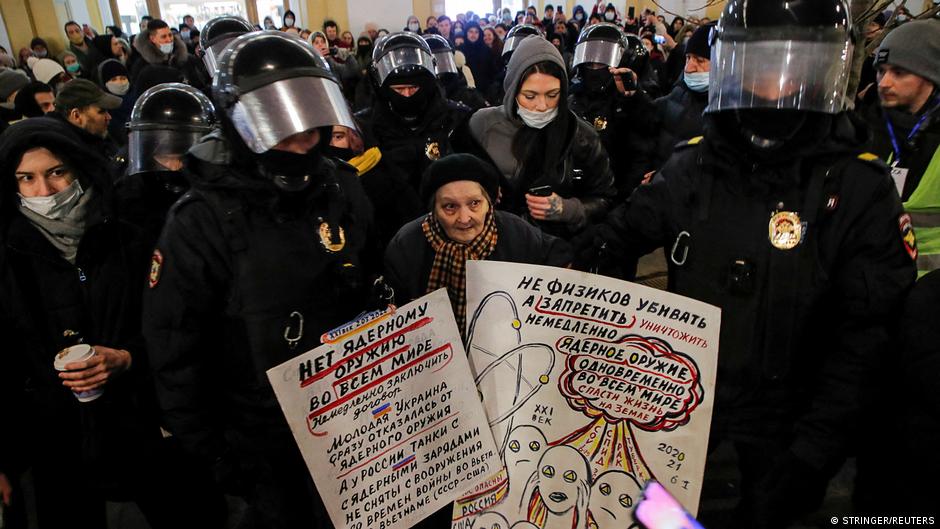 Yelena Osipova is an artist and political activist was arrested in a demonstration in St. Petersburg.

In another incident, Yelena Osipova a 77-year-old artist was seen among those arrested at an anti-war protest in St. Petersburg. People on social media began referring to her as the "grandmother for peace."

There have been about 15,000 arrests related to anti-war actions since February 24 with dozens still remanded in custody., according to the OVD-Info website.

Russia: Protests against Putin despite risks

War in Ukraine: How do people drum up courage?

People are awed by the bravery of the Ukrainian people, and of Russians protesting against their state despite all risks. Where does courage come from?

Navalny urges Russians to protest war 'wherever you are'

Tens of thousands in Berlin demonstrate for peace