Russian activists defy Putin to protest war in Ukraine | Europe | News and current affairs from around the continent | DW | 09.03.2022

Russia has seen anti-war demonstrators take to the streets from the day the invasion of Ukraine began. So far, more than 13,000 protesters have been arrested. They won't be silenced. 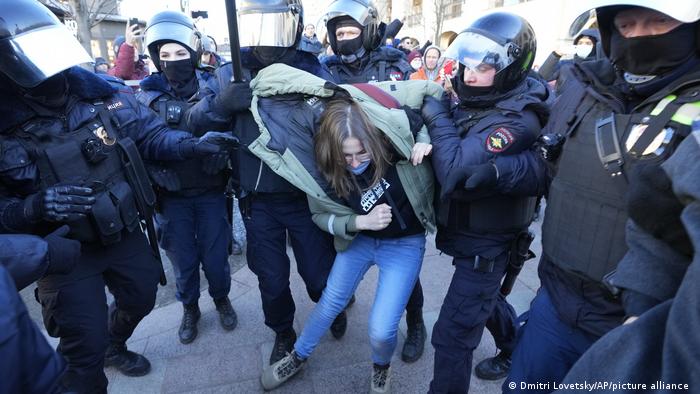 Countless Russians have taken to the streets to protest the invasion of Ukraine — and they have done so at considerable risk to their lives and livelihoods. Svetlana, a St. Petersburg-based illustrator who asked that her real name not be used, told DW that she remains undeterred by the thousands of arrests of protesters in the past two weeks. In more peaceful times, she used to share pastel-colored pictures and examples of her work on social media. Ever since Russia invaded Ukraine, she has shared deeply political messages on a black background.

Svetlana is not a political activist per se. She did once attend a rally in support of the jailed Russian dissident Alexei Navalny. She said she witnessed National Guard officers using brute force against detained protesters. She did not let the experience deter her from attending a recent anti-war rally.

"In Russia, we have no conventional notion of marches or mass protests," Svetlana said. Demonstrations are more like massive chases, she said, with protesters as the prey. "You head out onto the street and then spend all your time running through the city, escaping the police," Svetlana said. She follows a few rules to avoid arrest. One is that she tries to remain at the center of large crowds as protesters leading marches, as well as those at the rear, are more likely to get detained. She also tries hiding from police in narrow allies and cafes.

About 13,000 protesters have been arrested in more than 140 cities since Russia invaded Ukraine on February 24, according to OVD-Info, an independent human rights media project aimed at combating political persecution. There have been reports of authorities' using excessive force against protesters — including the use of truncheons and stun guns. Anti-war activists have been heavily fined and charged with serious offenses for taking to the streets. This includes individuals who have stood on public squares, all by themselves, holding anti-war placards. 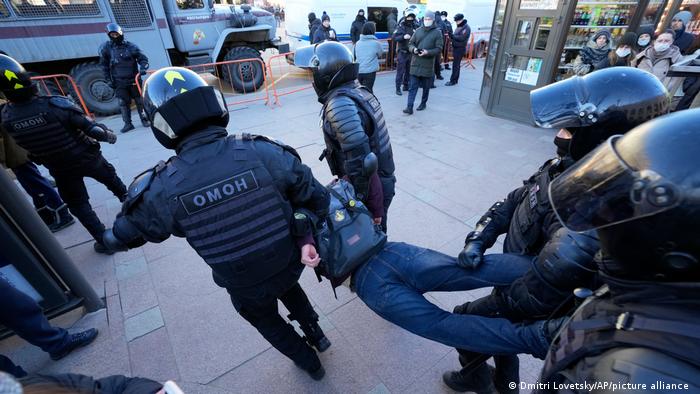 On March 4, the Duma adopted a law making it illegal to knowingly spread "false information about the activities of the armed forces of the Russian Federation." Authorities now have the final word in determining what constitutes fake news. People found guilty of spreading misinformation face fines of up to €10,000 ($11,070) and jail terms ranging from three to 15 years. Recent marches where activists have chanted "no war" could therefore be classified as actions designed to discredit Russian troops.

The sociologist Grigoriy Judin fears that Russia is transforming from an authoritarian state into a totalitarian state — with further repressive measures in the works. He said the new misinformation law could be instrumentalized to force anti-war protesters into exile.

Hospitalized himself with a concussion after police officers beat him at an anti-war protest on February 24, Judin said Russian society was divided over the invasion of Ukraine. The thousands of anti-war protesters who have been arrested prove that many Russians really do reject the assault. Nevertheless, he said, the marches are not generating sufficient momentum to bring about change. Russians, he said, have lost faith in their own political power after years of demonstrations have led to naught. Moreover, he said, the latest wave of protests lacks proper organization and leaders.

US rejects Polish plan to send fighter jets to Ukraine

A Moscow-based civil rights activist who asked that she be called Anastasia told DW that she has participated in numerous anti-war marches, but was disappointed with the latest gathering on Moscow's Pushkin Square. "It was a catastrophe," Anastasia said. "I have never seen such a feeble protest in Moscow." The frightened protesters had been quickly dispersed, chased away or arrested by police officers, she said.

Anastasia does not blame ordinary Russians for fearing the police. "Moscow controls a powerful security apparatus, and Russians are scared to lose their jobs now that sanctions have been imposed," she said. Many people have families and other responsibilities that keep them from protesting publicly, she added. All Russians are deprived of basic civil rights, she said: All Russians are vulnerable. Anastasia, however, said she had nothing to lose, which is why she continues protesting. "There are few like me," she said.

What depresses Anastasia most is the feeling that the entire world now opposes Russia. She is convinced that "sanctions, which punish ordinary people, will have no effect." Anastasia also notes that from the outside it is hard to comprehend why ordinary Russians feel so powerless in what she calls a "totalitarian" system. "Now, we are not even allowed to voice opposition to the war," she said. Still, she added, the current conflict is unwinnable for Russia's leadership: "This is the demise of Putin's reign  no matter the price the people of the country have to pay."

Anastasia said she could have secured a residency permit for another country and moved away, but she wants to stay in Moscow.

Svetlana, from St. Petersburg, however, is saving up money to leave Russia for good. It has been a difficult decision, but one she finds unavoidable. "In Russia you are faced with the choice of either risking your own future," Svetlana said, "or being called a coward by all those who keep taking to the streets."

While you're here: DW editors round up what is happening in Germany and the world in regular email newsletters. You can sign up here.