Riot police clashed with protesters at a Lesbos rally against the EU's migration policy. Some groups have warned that the island is "reaching breaking point" with thousands of refugees stranded by the policy. 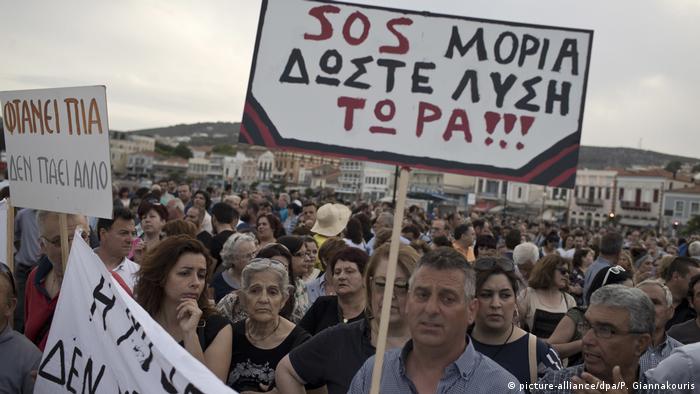 Riot police confronted protesters on the Greek island of Lesbos on Thursday who came out in opposition to the ongoing migrant crisis, which they say is disproportionately impacting their homelands.

Police formed a cordon and fired tear gas to block the protesters, after many of them tried to push over a police bus.

Clashes between officers and protesters lasted for more than an hour, although no injuries or arrests were reported.

Thursday's protest was part of an island-wide general strike to condemn a 2016 agreement between the European Union and Turkey that was expected to see migrants who landed on Greece's shores returned to Turkey.

Instead, some 15,000 migrants remain on Greek islands, including Lesbos, Chios, Samos, Leros and Kos, while their asylum claims are processed. Most of them are stuck in overcrowded camps as conditions worsen.

Migrant support groups say a large backlog of applications has been created, leaving local residents frustrated as their islands are overwhelmed with newcomers.

"It has gone too far. Every day buses (with refugees) arrive, and they're full," protester Yannis Vaxevanis said.

"The (government) has to do something and take the people somewhere else."

Read more: On the edge of the EU, refugee flows flood the Evros River

Tension has surged again on the Greek islands as the number of migrants arriving from Turkey has risen sharply in recent weeks.

Earlier on Thursday, the aid agency Doctors without Borders warned that Lesbos was "reaching breaking point."

It said some 500 new people were entering the island every week, overstretching healthcare and other services laid on for the migrants, while leading some to resort to violence.

Read more: Looking to the future: Strong women of the Greek refugee camps

During a visit to Lesbos on Thursday, Greek Prime Minister Alexis Tsipras attempted to quell anger by saying that if the EU-Turkey deal had not been agreed, the situation would be "three times as bad."

"Three years ago we had 4,000-5,000 people arriving every day," he said, whilst conceding that conditions were still "very difficult for migrants and residents."

Tsipras promised that additional staff would be deployed to speed up procedures.

In the meantime, the number of daily arrivals continues to rise, including 53 people picked up on Thursday from a yacht that ran aground on a remote beach in northeastern Greece.

What life is like for refugees on the Greek mainland

DW and Infomigrants visited several refugee camps on the Greek mainland. Most of the people staying in the facilities arrived there from the Greek islands. They all want to go on to Central Europe. (20.12.2017)