Looking to the future: Strong women of the Greek refugee camps | Europe | News and current affairs from around the continent | DW | 27.12.2017

Looking to the future: Strong women of the Greek refugee camps

They have fled from wars, persecution and sexual abuse - and have a strong will to move on. DW talked to women in several refugee centers in Greece about their hopes for the future and their adventurous journey. 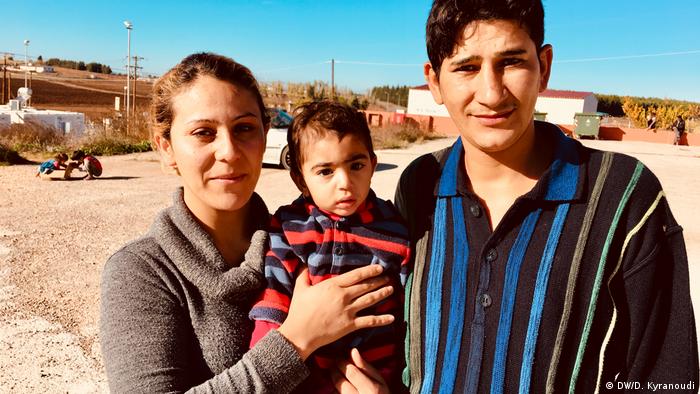 Migrants and refugees have threatened a hunger strike in Athens as a protest as they wait to reunite with family members in Germany. Family reunification can take months or years. (01.11.2017)

The issue of migration is deepening the rift between east and west in the EU. But for a long time now, more fundamental issues such as legal integrity and solidarity have been at stake, says DW's Bernd Riegert. (15.12.2017)

Germany's refugee and migration agency will end the year well short of its own integration goals. Waiting times for integration courses are up and participation rates are below target. (24.12.2017)

The European Union has spent the first half of its €6 billion agreement for Turkey to take in Syrian refugees. Officials are now assessing aid programs as humanitarian efforts carry on into 2018, reports Diego Cupolo. (27.12.2017)

Most of the women we met in the Greek refugee camps did not want to talk in front of a camera. It took many hours of long conversations to make them feel safe enough to share a few things about themselves. Only some of them approached us spontaneously, willing to share their stories and talk about their plans for the future.

One such woman is Silav, from the city of Hardan in northern Iraq. She was forced to leave her home with her husband, a peshmerga soldier, who fought against the "Islamic State" (IS) and was tortured. While they were leaving their city, he found a baby girl beside the road, apparently only a few days old, bleeding and crying, Silav told DW. He took the infant with him almost instinctively, without a second thought.

The three made it to Turkey and then to Greece, passing the region of Evros on the Greek-Turkish border. "I do not have children of my own. This baby is my child now. It was my duty as a woman to become her mother," she told DW. "I can't imagine our lives without her. I live and hope for a better future only because of this baby." For the time being, Silav, her husband and the now two-year-old girl are staying in the Greek town of Thebes, waiting for their family asylum application to be processed. "We want to leave. I just want to fight for my child," she said.

At the same refugee and migrant accommodation center in Thebes, we met many women from Afghanistan. There is a designated space where women can spend their time and can participate in creative activities. They talk freely with each other and to experts who help them; they watch movies and relax. In this center, they also acquire new skills, such as sewing.

We spoke to Faujia, who hails from Kunduz. She is the mother of a 10-year-old boy, who is already in Germany, and a newborn girl. "This baby was born in Greece, at the refugee camp of Hellinikon. The living and hygienic conditions at Hellinikon were miserable," she told DW, adding that: "There were no toilets, not enough beds. The baby was sick and there was no doctor." 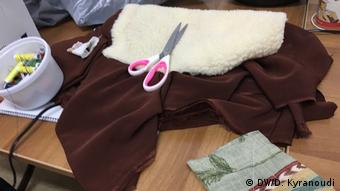 In the refugee center in Thebes, the women can acquire new skills such as sewing

Her family was forced to leave Afghanistan after a Taliban attack, when their entire neighborhood was devastated. "Every day, 30 to 40 people are still being killed in my city. The Taliban are everywhere," Faujia said.

Kunduz is also the birthplace of 12-year-old Nila, who is currently in Thebes. She speaks English impeccably, which is why she is able to help many of the other women in the refugee center in their communication with the administration of the camp and the NGO staff. "Life has been very tough, but now I am optimistic. I want to study medicine in Europe," Nila said.

Hurria does not want to talk about the past

At another stop of our journey through Greece, we visited the open accommodation center of Eleonas in Attica, not far from Athens. This camp pays special attention to the so-called "vulnerable groups," such as women, children and unaccompanied minors. Hurria and many other young women we met here are pregnant, expecting to give birth in Greece, a country they regard as a temporary stop on their long journey to central and northern Europe.

Hurria, who is in an advanced phase of her pregnancy, fled from Raqqa in Syria, the former bastion of the "Islamic State." She recently arrived in Eleonas from the Greek island of Lesbos, along with her husband and children. She talked to us in front of the door of her container-house, but did not want to show her face in public. "Living here isn't easy," she said. "There are not enough blankets. But it's definitely better compared with the islands." Like most of the other women we met at the refugee camps on the Greek mainland, she does not want to talk about the past, nor about the "Islamic State."

Monina's cousin was sexually abused by members of the IS 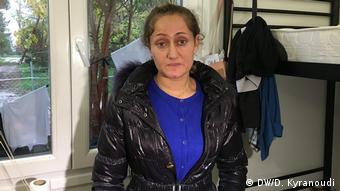 Monina: 'I was saved by mere luck'

Only a few women were eager to get into details about their journey to Europe and the routes they followed. One of them is Monina, a Kurdish Yazidi from northern Iraq. At the moment, she stays at a refugee center in Kavala with her family and her sick mother-in-law. She was even willing to show us their small temporary apartment inside the former Asimakopoulou military camp, just 10 minutes from the center of the town in northeastern Greece. "Many of my relatives have been kidnapped, and one of my cousins was sexually abused by members of IS. I was saved by mere luck," she told DW, being one of the only women willing to talk about the atrocities of the IS extremists.

These painful memories of the recent past cannot be erased, and the waiting time in the Greek refugee camps is difficult. In spite of all this, most of the women we talked to are driven by a strong will to move on. "There is no other choice than going on," concluded Silav, the young woman from northern Iraq who wants to fight for the child she and her husband found as they fled.