Viktor Orban, Fidesz plot to maintain their hold on Hungary | Europe | News and current affairs from around the continent | DW | 01.05.2021

Viktor Orban, Fidesz plot to maintain their hold on Hungary

With the polls projecting defeat for Hungarian Prime Minister Viktor Orban in 2022, the government is seeking to preserve its control over state institutions through a series of very well-funded foundations. 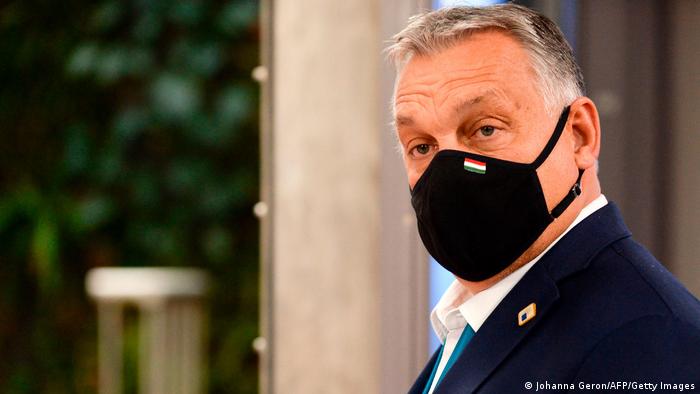 In just over a decade, Orban has completely transformed the way Hungary is governed

Viktor Orban is one of the most cunning politicians in Europe. Hungary's prime minister has done plenty to secure his power, from gaining control of — and exerting control over — media outlets to introducing an electoral law that favors his right-wing Fidesz party. His latest plan is to set up a parallel state that would allow the prime minister and his allies to maintain their grip on most areas of life after they are no longer officially in power.

Polls indicate that it is increasingly likely that Fidesz could lose in the 2022 parliamentary election. Hungarians are getting tired of Orban and sick of all the scandals and affairs in which his family and party cronies are embroiled.

Hungary clamps down on independent reporting

On Tuesday, the National Assembly, in which Fidesz enjoys a two-thirds majority, passed a bill allowing for the establishment of a nongovernmental agency to manage public assets and 32 similar foundations. Many foundations would take over the running of state universities — including affiliated institutions such as hospitals. Others would be entrusted with tasks covering most areas of public life, from education, art and media to family, youth and sport, and the environment and agriculture to the economy and international relations and the support of Hungarian minorities abroad.

As a result, every future Cabinet would have to share part of its power with a "parallel government run by Viktor Orban and embedded and hidden deeply in the administration," the lawyer and former opposition MP Andras Schiffer wrote.

In addition to gaining control of universities and their assets, the foundations would acquire real estate — from simple buildings to castles, parks and woodland — as well as stakes in state-owned companies. One example is the Mathias Corvinus Collegium (MCC), originally a small and relatively insignificant organization set up by Fidesz supporter and businessman Andras Tombor to train people for leadership positions.

At the stroke of a pen, MCC acquired 10% of shares in both the Hungarian oil and gas giant MOL and the pharmaceuticals company Gedeon Richter, estimated to be worth €1 billion ($1.2 billion). Furthermore, it will receive valuable real estate and billions of Hugarian forint from the state coffers.

The foundations are designed to be independent and will not be subject to state control. Though they are only allowed to spend funds for the intended purposes for which they were set up, they can do this as they please. A constitutional amendment passed last December means that a two-thirds parliamentary vote is now needed for any changes to be made to how foundations operate in Hungary. It is very unlikely that the opposition would obtain such a majority in the foreseeable future.

Boards of trustees will run the foundations, and members have already been appointed to indefinite terms. Successors will be appointed by the boards themselves. Ministers and secretaries of state, as well as many businesspeople who are close to Orban, currently number among the known trustees.

'A clever but malevolent idea'

According to the government, the foundations will streamline administration of state assets. However, the united bloc of six of the country's main opposition parties, which came together at the end of 2020, has issued a statement condemning the "transfer of public funds to private fortunes" and describing it as "theft." They criticized "steps to preserve the regime and to channel public funds and taxpayer money into Fidesz cadres' pockets."

Miklos Ligeti, the director of Transparency International Hungary, told DW that establishing the foundations was one of the most overt efforts to undermine the state since Orban came to power with a two-thirds majority in 2010. "The whole thing is a clever but malevolent idea, the dimensions of which can only be compared to Communist nationalization," Ligeti said. "We're talking about a completely unique model that doesn't exist in such a form anywhere else — not in Western democracies because they operate according to the rule of law and not in Eastern dictatorships because they don't pay attention to formalities."

Opposition parties have promised to abolish the foundations and return all assets to the state and thus the public, something Ligeti has said would require a "constitutional revolution."

"The only way I could see would be to invoke article C, paragraph 2 of the Hungarian constitution," Ligeti said.

The article is intended to guard against a return to dictatorship. "No person's activity shall be aimed at the forcible acquisition, exercise or exclusive possession of power," it reads. "Every person shall be entitled and obliged to act against such attempts in a lawful way."