Vietnamese authorities have detained more than 100 people protesting against the government's plans to create new urban economic zones. Many fear that Chinese companies and investors will get the lion's share. 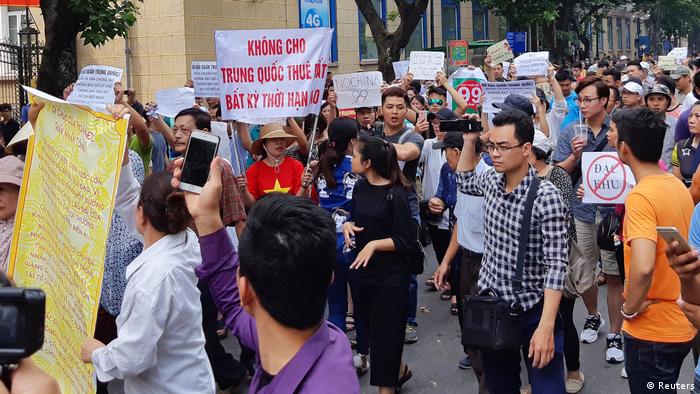 Hundreds of Vietnamese took to the streets in different parts of the country on Sunday to demonstrate against a government proposal to grant companies lengthy land leases.

A draft law would allow foreign investors to lease land in special economic zones for up to 99 years. Although the proposed legislation does not identify any country in particular, many in Vietnam fear that these economic zones could be dominated by Chinese firms.

"The bill is designed to give a strong boost to the development of three special administrative and economic units, including Van Don in Quang Ninh province, Bac Van Phong in Khanh Hoa province and Phu Quoc in Kien Giang province, and room for institutional experiments," the government said.

In response to the criticism over the bill, the government announced that it would be postponed until the October parliamentary session.

The announcement, however, failed to pacify the demonstrators, who clashed with police over the weekend, with 102 people detained on Sunday.

"No leasing land to China even for one day," chanted protesters in Hanoi and the economic hub Ho Chi Minh City. Protesters stormed a government building in Binh Thuan province, burned vehicles and fought with police, local media reported on Monday.

Ties between Vietnam and China have deteriorated as a result of an ongoing conflict over South China Sea islands, which both countries claim.

There have been protests against Chinese companies in Vietnam in the past, but public demonstrations are rare in the one-party state.

US President Donald Trump has offered to mediate in a territorial dispute over the resource-rich South China Sea. Both China and Vietnam have economic incentives to work out their differences. (12.11.2017)

Vietnam's president will be attending the Belt and Road Forum in Beijing. It will be interesting to see how Vietnam tries to improve its negotiating position with China, writes DW's Frank Sieren. (13.05.2017)