An Iraqi accused of trying to derail three German high-speed passenger trains in 2018 has been handed a life sentence by a court in Vienna. The jury ultimately rejected his denial of being an "Islamic State" supporter. 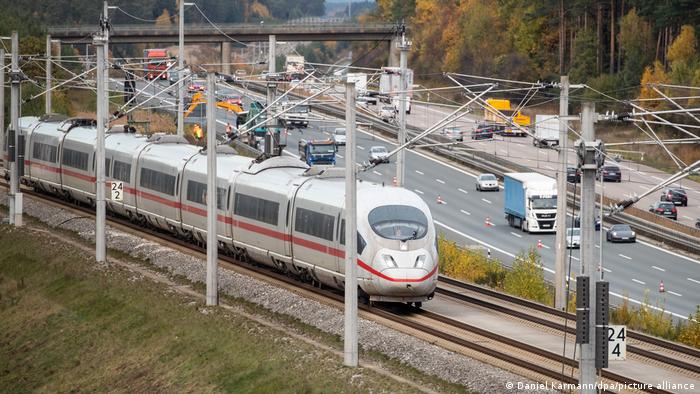 Vienna's regional court on Thursday sentenced a 44-year-old Iraqi to life in prison for attempting to derail high-speed passenger trains in Germany.

The man had been living in the Austrian capital as a refugee with his wife and four children since 2013.

The Austrian news agency APA and broadcaster ORF reported that the eight-member jury was convinced the man had acted for the radical "Islamic State" (IS) group, which he denied.

His 33-year-old wife, who had been charged as being an accessory but denied involvement, was acquitted.

Via his lawyer, the main suspect claimed he wanted to put pressure on European countries to pull their troops out of Iraq. He said his actions had been a "big mistake."

The convicted Iraqi had faced charges of attempting multiple murder as terrorist acts, causing serious damage, and being a member of a terrorist organization.

Police tracked him down after the original of a threatening note was left lying at a Vienna copy shop prior to a fourth bid to sabotage a regional train in Berlin in December 2018.

Prosecutors said that on three occasions — in January, August and October 2018 — the 44-year-old had traveled to Allersberg, a town near Nuremberg on the main rail route to Munich in Germany's state of Bavaria, and on two occasions left behind Islamist material.

At Allersberg he tried to derail high-speed ICE passenger trains using chains, metal parts, wooden wedges and a steel rope purchased from a hardware store, and after briefing himself on railway technology. He did not succeed in derailing the trains and no injuries were reported.

But during the third nighttime attempt in October 2018, an ICE carrying 160 passengers and traveling at 204 kilometers per hour (127 miles per hour) struck a steel rope strung between masts, causing a flash and front-end damage.

Prosecutors had alleged that on his arrival in Austria, the man, who ended up working in a Vienna supermarket, had sought IS contacts, including an Iraqi living in Switzerland, Austrian broadcaster ORF reported.

According to prosecutors, he had initially traveled to Paris and Marseille looking for attack locations before deciding to target German ICE trains, ORF said.

Austrian authorities say an alleged Iraqi terror "cell" planned and carried out attacks on German train lines. Investigators now believe there may have been more than two attempts to derail trains.