Learn a funny, quirky German word each week with DW's Word of the Week feature. This week: Vergangenheitsbewältigung. 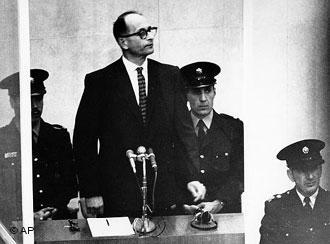 Vergangenheitsbewältigung ("overcoming the past") is generally associated with Germany's process of coming to terms with the history of National Socialism and the Holocaust. Immediately after the war, the occupying Allied powers in Germany made efforts to "de-Nazify" the way Germans viewed the world. The process of Vergangenheitsbewältigung continued over the next several decades in court, with the Nuremberg and Eichmann (photo) trials, for example, as well as in academic circles, among the political class and through the media. Germans struggled not only to understand how Nazi atrocities could have come about but what the past meant for the next generation. Since 1989, the term Vergangenheitsbewältigung has been also used in the context of dealing with the East German communist dictatorship.