Following his Palme d'Dor triumph in 2018 for "Shoplifters," the Japanese director's anticipated new film starring Juliet Binoche and Catherine Deneuve has made a splash on Venice's opening night. 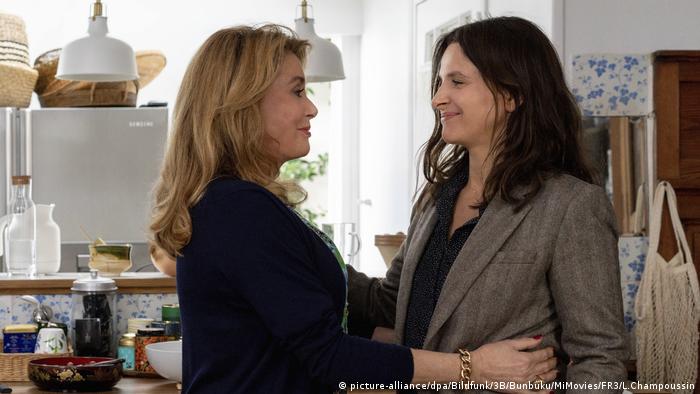 For the first time, Hirokazu Kore-eda has made a film outside his Japanese homeland, and for the first time with non-Japanese actors — and in English. But as the film opened the Venice Film Festival on Wednesday night, there was broad consensus that the experiment continued his impressive body of work.

"From first shot to last, it's a film of high wit and confidence and verve, an astonishingly fluid and accomplished act of boundary-leaping," wrote the film publication Variety in its effusive review of The Truth.

The Japanese director drew comparisons with contemporary French dramatists such as Olivier Assayas (Irma Vep) for the story of an ageing screen goddess, Fabienne (the suitably cast Catherine Deneuve), who is visited in Paris by her screenwriter daughter (Juliette Binoche) and mediocre actor husband (Ethan Hawke) and young child from New York. The occasion is the publication of Fabienne's memoir, The Truth.

But the reunion is quickly racked by unresolved tensions between daughter Lumir and narcissist Fabienne, who always put her career above her family.

"Who are you kidding," Lumir asks Fabienne upon reading the memoir for the first time. "I can't find any truth in here." Deneuve cooly chides Binoche for recalling some home truths about her childhood. "My memories, my book," says Fabienne. "I can pick and choose."

The Japanese director is a master at portraying the emotional and psychological nuances that define familial relationships. "The cast is prestigious but the film itself recounts a small family story that takes place primarily inside a house," Kore-eda said when it was announced that the film would open the Venice festival. "I have tried to make my characters live within this small universe, with their lies, pride, regrets, sadness, joy, and reconciliation."

After the film's much-anticipated screening, the critics mostly agreed that the director's efforts to transpose his very Japanese family melodramas onto contemporary Paris was a success. Culture publication Indiwire called the film a "wise and diaphanous little drama" that offers "yet another insightful look at the underlying fabric of a modern family."

The response will have pleased festival director, Alberto Barbera. He praised "the encounter between the universe of Japan's most important filmmaker today and two beloved actresses like Catherine and Juliette Binoche" in a film that "brought to life a poetic reflection on the relationship between a mother and her daughter, and the complex profession of acting."

On opening night, Barbera had to respond to further criticisms of another male-dominated competition at Venice — but though only two of 21 selected films are directed by women, he rejected a call for gender-based quotas, saying it "would mean that the only criteria that needs to apply in the selection process, which is the quality of each film, would matter less."

Though this is Hirokazu Kore-eda's 14th film, he only cemented his status as Japan's preeminent contemporary filmmaker when his family drama, Shoplifters, won the Palme d'Or at Cannes in 2018. The story of a struggling family living cramped in a small apartment in Tokyo who supplement their living with shoplifting, the patchwork family is also hiding a secret that will devastate them.

Previous Hirokazu Kore-eda works similarly revolve around the fate of parents and children, sibling conflicts and broken families. These include the Cannes Jury prize-winning Like Father, Like Son from 2013 that told of two families who one day learn that their children were exchanged at birth — and are forced to make a choice between their biological son and the child they raised.

Twenty-five years ago, Kore-eda made his international, award-winning debut in competition at Venice back with Maboroshi, the story a widow who is left with her child after her husband's death and struggles to find happiness in a new relationship.

But with his first film set outside Japan, and performed in English and French, The Truth might be seen as another debut of sorts for the director who has often been compared to Japanese cinematic master, Yasujiro Ozu (Tokyo Story).

The French actress, and the star conductor Riccardo Muti, are among those honored with the Praemium Imperiale. The Japanese award is often billed as the Nobel Prize for the Arts. (11.07.2018)

"Shoplifters" by Hirokazu Kore-eda has won the Palme d'Or at the Cannes Film Festival. A total of 21 movies were competing to win the top prize. (19.05.2018)

An open letter signed by over 100 celebrities, among them Catherine Deneuve, in the newspaper Le Monde has caused an uproar in France, where stars are divided about the role of the #MeToo and #BalancetonPorc actions. (10.01.2018)