Government and opposition envoys meeting in Norway have failed to reach an agreement in their latest rounds of talks. Opposition leader Juan Guaido has vowed to press ahead with street protests. 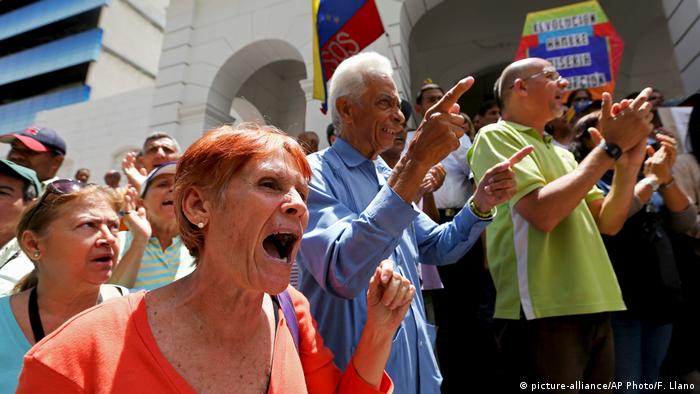 A second round of talks in Norway between representatives of Venezuelan President Nicolas Maduro and opposition leader Juan Guaido aimed at resolving the nation's political crisis have ended "without agreement," Guaido's office has announced.

The office said the opposition remained willing to continue the mediation so long as progress was being made. The talks are part of international efforts to resolve a conflict between Maduro and Guaido, who declared himself interim president of the South American nation in January in an attempt to oust Maduro.

"We have insisted that mediation will be useful for Venezuela whenever there are elements that allow us to advance in support of a true solution," Guaido's office said in a statement late Wednesday.

During the meeting in Norway, Guaido's representatives said they had laid out a road map for ending Maduro's presidency, installing a transition government and holding free elections that would "resolve the tragedy that Venezuela is suffering."

'We want a peace deal'

Speaking on national television, Maduro said the government had prepared for the Norway talks with months of secret negotiations.

"The only way forward is dialogue," the Venezuelan president said. "We want a peace deal."

"There was no immediate agreement, so the chance that we have today is to remain in the streets," Guaido said, speaking via an interpreter. "We want to reach a solution to the conflict."

Norway said the two sides had made progress in the second round of meetings in the Norwegian capital, Oslo.

"The parties have demonstrated their willingness to move forward in the search for an agreed-upon and constitutional solution for the country, which includes political, economic and electoral matters," said Norwegian Foreign Affairs Minister Ine Eriksen Soreide.

In a statement, Oslo called on both sides to show discretion in public comments so as to not damage the ongoing process.