Uwe Rösler: German reunification ′came at the right time for me′ as a footballer′ | Sports| German football and major international sports news | DW | 08.11.2019

Uwe Rösler was 20 when the Berlin Wall fell, paving the way for German reunification on and off the football pitch. He recalls a tricky transition, as talent was headhunted and players learned new rules to an old game. 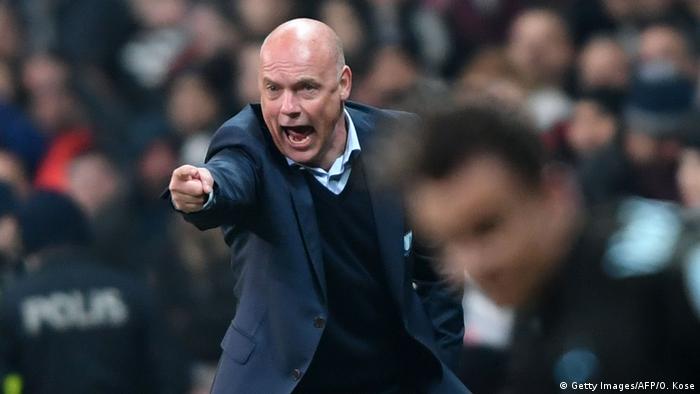 Rösler moved into management after retiring from the game, and is currently with Malmö FF in Sweden

Best known in the English-speaking world for his five happy years and 50 league goals with Manchester City, Uwe Rösler caught up with DW to reminisce about the beginning of his career in East Germany, right as the former communist state ceased to be.

Rösler left Leipzig in January 1989, grabbing his first big break in East German football with FC Magdeburg. The young talent had no idea at the time that within a matter of months, the Berlin Wall would fall, and that before long, East Germany's top division, the Oberliga, would no longer exist.

"Politically a lot of things happened, especially in my home town Leipzig. We spoke every day, we started to dream what might happen. We were concerned about our friends and relatives. We didn't know if those demonstrations would end in peace or if the army would step in," Rösler recalls. "There were a lot of things in our heads, and obviously the focus for football went out of the window."

Rösler was in Austria when the wall fell, preparing for an East German international game, after enjoying a breakout season with Magdeburg. He recalls that it wasn't just politics that derailed preparation for the match; East German stars were bombarded by Bundesliga agents hanging around outside their hotel and hoping to tap a new source of potentially undervalued talent.

"Selfishly, it was a very good time, I was starting to shine in the Oberliga — one of the top scorers, still very young, just came into the [East German] national team. So, exciting times ahead," Rösler says. "I played with a lot of very talented players in the East who weren't as fortunate as I was, who were heading towards the ends of their careers by then. The change came at the right time for me."

Read more:  Opinion: Berlin derby was an advert for German fan culture, but some went too far

Staying in the East, but reaching the Bundesliga

Many of the Oberliga's stars moved west, often at bargain prices. The jewel in the league's crown at the time, Matthias Sammer, left Dynamo Dresden for Stuttgart in the summer of 1990 — he would move on to Borussia Dortmund two years later for more than four times the fee Dresden recouped.

"The Bundesliga clubs came over and headhunted all the talent out of the east. And the eastern clubs didn't get paid the money they deserved to rebuild their clubs and their structure. When you see transfer fees for Matthias Sammer, Thomas Doll, Andreas Thom or Ulf Kirsten — they were nowhere near what the player was worth in international football," Rösler says.

Rösler, however, elected to stay in the East for the final 1990-91 season. He moved on to Dresden, hoping that one of the Oberliga's powerhouses would secure a spot in the unified Bundesliga. It wouldn't be an easy task. Only two extra spots were earmarked in an expanded 1991-92 Bundesliga season for the top two finishers in the East; Dresden secured second. Joining the all-German league was electrifying, he says.

"We qualified, that was a big highlight in my career. And in the first season we survived against all the odds," Rösler says, with the last Oberliga champions Hansa Rostock facing immediate relegation that year. "You have to understand, we watched our idols on TV for years, decades, and then we played against them. We never dreamed that would ever happen for us." 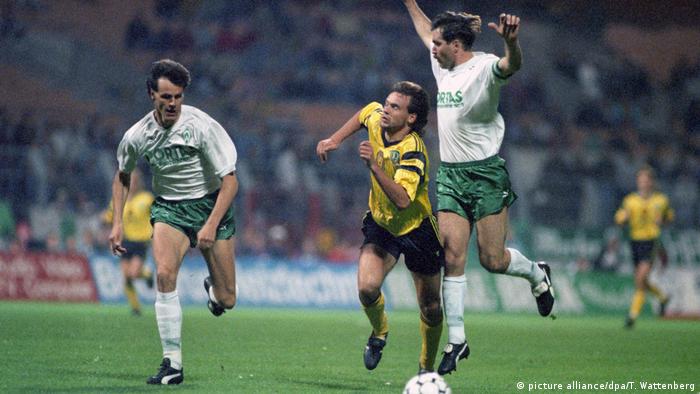 With Dynamo Dresden, Rösler (c.) reached the Bundesliga and survived there; the club's 1991-92 Cup run faltered in this round of 16 game against Werder Bremen

But Bundesliga football presented a challenge on "another level," as Rösler puts it. It's worth remembering that in 1990, the year of German reunification, West Germany won the World Cup.

Learning to cope with a different game, 'elbows out'

As in so many walks of life, East German players sometimes struggled to get to grips with the new freedoms and different expectations outside communism. Rösler says he personally was "a little bit overwhelmed" because "there were so many new things at once, contracts, agents, you had the choice of where you wanted to work. Before, everything was restricted."

The media, too, played by different rules. Rösler describes a relatively staid East German sports media landscape, one that tended to avoid sensational coverage and rarely focused on individual players. At Dresden, Rösler got his first taste of positive press hype — and then on his short-lived move to Nuremberg he encountered personal tabloid criticism, as a pricey new signing up front who struggled to score goals on arrival.

Now working in Sweden as coach of Malmö FF, and speaking to DW right after missing out on the league title by a single point, the 50-year-old Leipzig lad recalls that the capitalist lesson it took him longest to learn was to look after number 1, even in a team sport like football.

"There was also a little bit of society with elbows," Rösler says, in a clear nod to the German term Ellenbogengesellschaft (literally: elbow society), which you might loosely translate as a dog-eat-dog world. "You had to look after yourself. In the East we came from more of a collective. We were a team. In the West you need to expand your elbows to survive," he says, spreading both elbows wide as if going for a header in a manner sure to end in a red card. 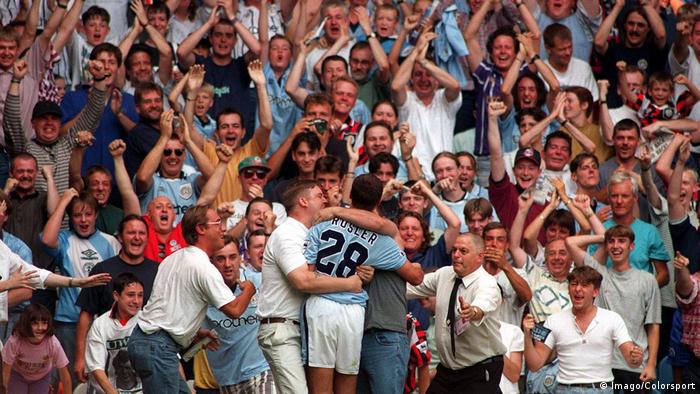 In terms of capitalist clubs, you could argue Rösler found his true home not in Germany, but with Manchester City; for City fans of a certain age, this goal as rank outsiders in a 1995 derby Manchester United remains the stuff of legend, even in a 3-2 defeat

No Oberliga teams in Bundesliga, but two from the East

None of the teams from the last Oberliga season are currently in the German top flight. However, the GDR's rebellious subversives at Union Berlin are taking part in their first ever Bundesliga season, while a new team from Rösler's home town, RB Leipzig, is seeking to secure a spot among Germany's very best. The Red Bull-funded multinational football empire might not have met with approval from East Germany's government, to put it mildly, but Rösler is far more supportive of the commercial club.

"That somebody comes in and gives Leipzig the chance to participate in the Bundesliga and Champions League and have the option to fight for titles, is fantastic," Rösler says. "That is not everybody's cup of tea. But for the Leipzig people, for eastern football, it is important that Leipzig has a team that will be part of the Bundesliga family for decades and will write history. And the town benefits too — tourism, exposure worldwide. So it can only be good for the east."

Also noting Union Berlin's reasonable early-season chances of dodging relegation against the odds, Rösler believes that more eastern clubs can take the step into the top flight in the coming years, starting with his old club Dynamo Dresden, currently in the second tier.

Despite his sometimes critical analysis of what went wrong when reunifying German football, Rösler's keen to point out that the process was unprecedented and very challenging for all involved.  He also notes how East German traditions were soon adopted to improve the unified German national team. To explain how, we return to another renowned Dynamo Dresden old-boy:

"When Matthias Sammer took over in the [national team setup], he basically copied a lot of things that already happened decades before in the East. Youth development, sports schools with boarding facilities for youngsters, training at school, early scouting of potential talents... We grew up with all those things — government sponsored. I saw a lot of these things being installed in the years between 2000 and 2010. And the golden years came after that."

Germany's first and only World Cup win as a unified country followed soon after.