Opinion: Berlin derby was an advert for German fan culture, but some went too far

The football might have been underwhelming in the Berlin derby, but this was German fan culture at its best — until rockets were fired onto the pitch. At that point, a line has been crossed, writes DW's Matt Ford. 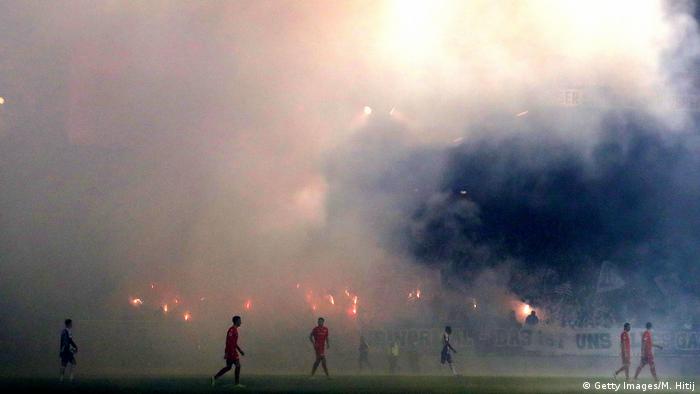 Greek font, Doric columns and a red-and-white Perseus battling a blue and white Medusa; the Union Berlin ultras had dug deep into their old Greek mythology school books for some derby day inspiration, and no expense was spared.

"Having arrived at football's Olympus, after a sheer endless odyssey, you will now fight your greatest battle,” read the immense banner unfurled across an entire stand at the Stadion an der Alten Försterei ahead of kick-off against local rivals Hertha. "For your opponent, this will mean henceforth: first sin, now death."

Mythological rhetoric and a spectacular setting in "Athens on the Spree” — the climax of weeks of anticipation building up to Berlin's first Bundesliga derby since 1977, and the first Bundesliga derby ever between these two neighors. But in the end, the Berlin derby was less of a drama and more of a tragedy.

On the field, after five exhilarating afternoon kick-offs delivered 24 goals between them on Matchday 10, these two bottom-half Bundesliga sides brought us back down to earth

Union's Christopher Lenz headed through the smoke and onto the post after just three minutes, but the subsequent 87 minutes until Sebastian Polter's late match-winning penalty made for difficult viewing as both teams labored in possession and struggled to create chances of note.

As is so often the case with high profile derbies, attention turned to the terraces, where the travelling Hertha supporters were in equally vibrant mood as their Union counterparts.

"There is only one Berlin and that is my Berlin!” read the choreography in the away end, quoting the words of 1920s Berlin kabarett singer Claire Waldoff. Meanwhile, the ultras had distributed reversible blue and white hoodies, which had the effect of turning their section into horizontal blue and white blocks in the first half and vertical stripes in the second.

And there were pyrotechnics a plenty, the Hertha ultras setting off flares and blue smoke bombs even before kick-off while their Union counterparts on the "Waldseite” terrace at the opposite end waited until half-time to unleash an inferno of their own.

But then some of them went too far. Rockets were fired out from the Hertha section, some landing on the pitch among the players, one landing just centimeters away from a member of Union's coaching staff on the sideline. Referee Deniz Aytekin temporarily took the players off the field.

"I understand the emotions at play but sometimes a line is crossed,” said Hertha coach Ante Covic, who just 24 hours earlier had praised the ultras for their support at his team's final training session.

A disservice to fellow fans

The use of pyrotechnics is a hotly debated issue in German football, a debate which is too often sensationalist and polemic. "Incorrigible hooligans who are destroying the game,” scream the inevitable headlines, but when rockets are fired and thrown, those fans who use pyrotechnics responsibly week in week out hardly have a leg to stand on.

Such behavior isn't just dangerous; it gives the authorities, the tabloids and the police the ammunition they need to introduce even more repressive measures against football supporters. They're doing themselves and fellow fans a massive disservice.

At the other end, the Union fans weren't much better. No fireworks were thrown onto the field from the "Waldseite” but a homophobic banner was held aloft before, at full-time, a dozen masked ultras attempted to enter the field of play in a vain attempt to get at the Hertha fans which was thwarted by Union players.

"At that point, we players are probably the only ones who can really do anything,” said Christian Gentner, who had won the late penalty which Polter converted. "The lads wouldn't do anything to us and eventually they went back into their block.”

The Berlin derby delivered much of what is brilliant about German football. The football might have been underwhelming, but this was fan culture at its best: loud, raw, independent, spectacular, historic and laced with nuance and feeling, all organized by active supporters who are so much more than just customers, and to whom their clubs mean absolutely everything.

It's a shame that some went too far, and now everyone will pay the price.