The Turkish president has announced a fresh offensive against Kurdish fighters in Syria is just around the corner. But the US has warned that such action would harm efforts to destroy the "Islamic State" in the region. 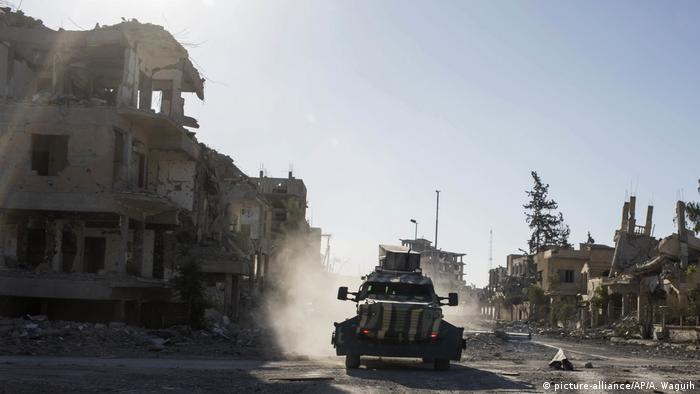 The US on Wednesday warned Turkey against launching an operation targeting Kurdish militias in northern Syria, saying such action would be "unacceptable."

"Unilateral military action into northeast Syria by any party, particularly as US personnel may be present or in the vicinity, is of grave concern," said Commander Sean Robertson, a spokesman for the Pentagon.

Robertson said Washington was committed to Turkish border security, but noted that the US-backed Syrian Democratic Forces (SDF) led by the Kurdish People's Protection Units (YPG) remained a "committed partner" in the fight against the "Islamic State" (IS) militant group.

"We should not and cannot allow ISIS to breathe at this critical point or we will jeopardize the significant gains we have made alongside our coalition partners and risk allowing ISIS to resurge," Robertson said, referring to the militant group by an alternative acronym.

But Turkey considers the YPG an extension of the terrorist-designated Kurdistan Workers' Party (PKK) and views its consolidation of territory in parts of Syria as a threat.

Operation 'in a few days'

The Pentagon's remarks came hours after Turkish President Recep Tayyip Erdogan said Turkey would launch an offensive against the YPG in the near future.

"We will start the operation to clear the east of the Euphrates from separatist terrorists in a few days," Erdogan said during a speech at a defense industry summit in Turkey. "Our target is never US soldiers."

While Turkey has attacked Kurdish fighters in Syria, it has hesitated to launch an offensive east of the Euphrates, where the US has troops deployed in the fight against IS. The Turkish government has been frustrated with the US concerning a deal for the area.

"The step will allow for the path to a political solution to be opened and for healthier cooperation," Erdogan said.

The leader was responsible for the beheading of a US aid worker in Syria, said a US official. Even as the group suffers military defeat in Iraq and Syria, the UN has warned it still poses a threat to global security. (03.12.2018)

Terrorism deaths down, but still a widespread issue

The Global Terrorism Index 2018 showed the decline was most pronounced in Iraq and Syria. Islamic State tops the list of deadliest terror groups, but far-right extremism is also on the rise. (05.12.2018)