Syrian Kurds seize territory from IS with US, Russian support

Syrian Kurdish fighters have cleared the "Islamic State" from parts of eastern Deir el-Zour province, with US and Russian support. The move comes as the US is considering adjusting support to the YPG militia. 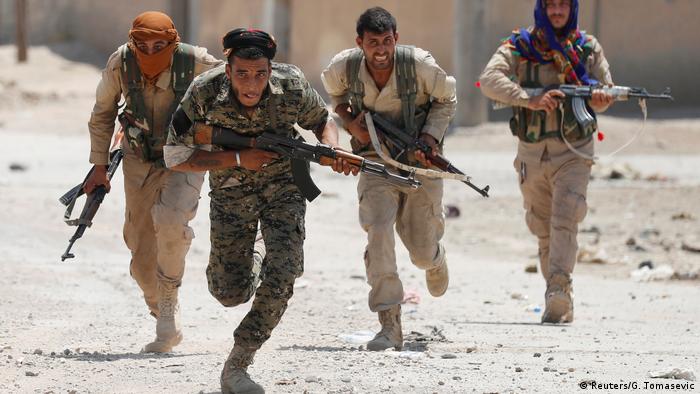 Syria's powerful Kurdish militia, the People's Protection Units (YPG), has recaptured nearly all of the eastern Deir el-Zour countryside from "Islamic State" (IS) militants, capitalizing on help from both the US-led coalition and Russia.

The YPG is the dominant member of the Syrian Democratic Forces (SDF), an alliance of Kurdish and Arab militias backed by the US that is fighting IS militants in Syria.

But their latest offensive — east of the Euphrates River — included support from both the US and Russia, signaling expanding cooperation in a cluttered battlefield space that includes Syrian government forces and allied Iranian forces and Shiite militia.

The YPG announced it had defeated IS militants on its side "in cooperation with the Arab tribes."

Both the US-led coalition and Russian forces in Syria provided "air and logistical support, advice and coordination on the ground," said a YPG statement. "We hope for an increase in this support and for ensuring the necessary air cover."

A YPG spokesman declared the victory in a village in Deir el-Zour province in the presence of a general from the Russian base in Hmeimeem, in western Syria.

"The eastern countryside of the city has been fully liberated from 'Islamic State' ... with the international coalition and Russia's support," said YPG spokesman Nuri Mahmoud.

"We thank the international coalition and the Russian forces for their air, logistical, advisory support and coordination on the ground."

The Syrian army has waged its own military offensive against IS jihadists on the west bank of the Euphrates. They have been supported by Iranian-backed militias, as well as Russia.

The US-led coalition and the Russian military have organized meetings to prevent inadvertent clashes between planes and troops, although the two offensives have occasionally come into conflict.

It is not the first time Russia and the YPG have cooperated and coordinated.

IS once held much of the oil-rich province but has lost almost all of it, according to the Britain-based Syrian Observatory for Human Rights monitor.

Observatory director Rami Abdurrahman said Sunday that IS still held several villages in the province, on both banks of the Euphrates River.

The SDF began its assault on IS positions in the eastern half of Deir el-Zour province in September, as Russian and Iran-backed Syrian government troops pressed IS from the west.

— IS suffers major loses in Syria and Iraq

From the beginning of the conflict in Syria, Kurds have rarely clashed with forces loyal to President Bashar Assad and often coordinated against shared enemies.

The two sides have had a tacit understanding over shared concern about jihadi, foreign-backed rebels and neighboring Turkey, which considers the YPG a terrorist organization affiliated with the Kurdistan Workers' Party (PKK).

The Kurds now control about a quarter of Syria's territory and are setting up institutions for a degree of autonomy as they position themselves for an eventual political solution to the conflict.

A major question has been how the Assad regime and its backers would respond to Kurdish gains and the presence of US forces in their areas of control.

The US-led coalition has provided air support, weapons and advice to the YPG and SDF in their fight against IS jihadists.

But last week, the White House said it would soon begin making "adjustments" to its military support for the SDF, an indication that it is planning to pare back its combat support.