Kamala Harris became the first US vice president to visit Vietnam. She has urged action against "bullying" by Beijing amid tensions in the South China Sea. 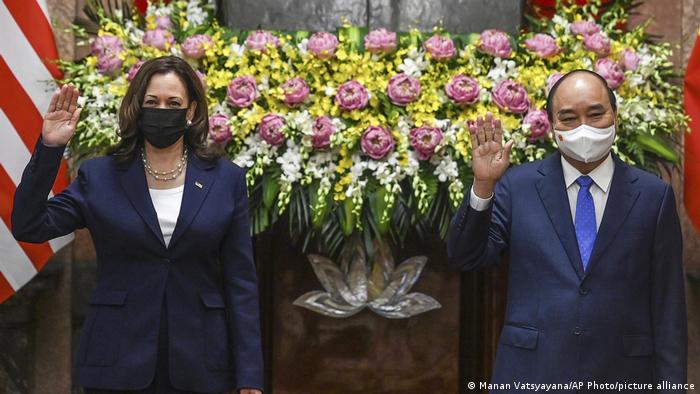 US Vice President Kamala Harris on Wednesday called on Vietnam to back Washington against China's maritime claims in the South China Sea.

Harris is on a seven-day tour to Southeast Asia. She flew to Vietnam Tuesday evening after delivering a major foreign policy speech in Singapore, where she slammed China's coercion and "intimidation" in the South China Sea.

Her visit is the first to Vietnam by a sitting US vice president. However, Harris's trip was delayed by several hours on Tuesday afternoon after her office was informed by the US embassy in Hanoi about a "possible anomalous health incident" which had similarities to the mysterious Havana Syndrome.

What did Harris say in Vietnam?

"We need to find ways to pressure and raise the pressure, frankly, on Beijing to abide by the United Nations Convention on the Law of the Sea, and to challenge its bullying and excessive maritime claims," Harris said during her opening remarks at a meeting with Vietnamese President Nguyen Xuan Phuc.

Harris also said the US supported sending the country an additional US Coast Guard Cutter to help it defend its maritime interests. Hanoi shares US concerns about Beijing's aggression.

Chinese state media accused Harris of driving a wedge between the country and its neighbors in the region on Wednesday morning.

Why is Harris facing a backlash?

Harris' visit to the region is part of the Biden administration's motto to ramp up ties with Asian partners and deepen engagement in the region. But the timing of the trip has been criticized by analysts.

Biden on Afghanistan evacuations: 'The sooner we can finish, the better'

The chaos surrounding the withdrawal of foreign forces  from Afghanistan has put the world's focus on the state of affairs in the country. Images of people being lifted from the US embassy in Kabul sparked comparisons with the trauma of US' exit from Saigon.

In 1975, US helicopters ferried evacuees from the embassy roof in the last few days of the Vietnam war.

Harris did not travel to Saigon, which is now known as Ho Chi Minh City.

What is the South China Sea dispute?

But China has built military outposts on artificial islands in the sea and objects to foreign warships passing through what it claims is its sovereign waters.

The US regularly conducts "freedom of navigation" operations through the disputed waters that China objects to.

What about US support for Vietnam in the fight against COVID?

Harris also announced the launch of a new Centers for Disease Control and Prevention Southeast Asia regional office, making it one of the only four regional offices of the US public health body globally.

She said the US would also donate one million shots of the BioNTech-Pfizer COVID vaccine to Vietnam.

The US has donated five million doses of COVID vaccines to Vietnam, a country that is struggling with a recent surge in cases. Less than 2% of its population of 98 million people has been vaccinated so far.