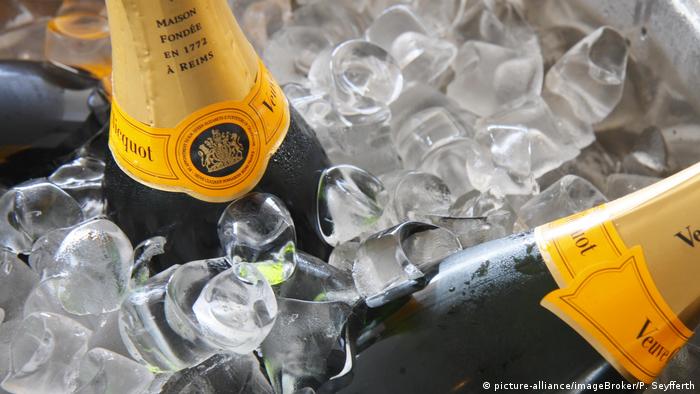 After French lawmakers voted to impose a tax on large tech companies, the US warned it would fire back with tariffs on goods imported from France.

On Monday, the Office of the US Trade Representative said the tariffs could target $2.4 billion (€2.2 billion) in imports, including cheese, wine, and handbags. The rate could also reach 100%.

Sitting alongside French President Emmanuel Macron ahead of a NATO summit in London on Tuesday, US President Donald Trump told reporters, "We've taxed wine and we have other taxes scheduled. We'd rather not do that, but that's the way it would work. So it's either going to work out, or we'll work out some mutually beneficial tax."

"We'll be talking about a lot of things including NATO and including trade...We have had a minor dispute but I think we will probably be able to work it out," he added.

Macron also expressed hope that the trade dispute could be avoided, but said he was "determined to defend the interests of my country and of Europe."

"I think that with President Trump we can resolve this situation," he said. He also asked how the US plans to deal with digital taxes in the works from Britain, Italy, Austria and Spain, saying all countries should be treated equally.

US trade officials said they would hold a hearing on the plan on January 7.

The French digital tax aims to prevent tech companies from dodging taxes by reporting their earnings in low-tax EU countries. The measure would hit a total of 30 companies from various countries, including China, Germany and the UK. However, most of the targeted companies are US-based, including Google, Amazon and Facebook.

"In case of new American sanctions, the European Union would be ready to riposte," Le Maire told Radio Classique on Tuesday. The day before, the EU Commission had said it would "react as one and remain united" as it does in any trade matter.

'Unusually burdensome' for US companies

The US has long decried the measure. With talks between Washington and Paris not yielding much progress, however, France's Senate gave the final approval for it last month. The new legislation imposes a 3% annual levy on French revenues of major companies, and applies retroactively, from the beginning of 2019. It only targets businesses that have yearly global sales of over €750 million and make over €25 million in France.

On Monday, US trade officials said that they had investigated the measure and found it was "unusually burdensome for affected US companies," according to a statement.

The US move "sends a clear signal that the United States will take action against digital tax regimes that discriminate or otherwise impose undue burdens on US companies," said trade representative Robert Lighthizer.

The trade office warned of "growing protectionism" in Europe at the expense of the US.

Lighthizer said the Trump administration was also looking into a similar response for such taxes in Austria, Italy, and Turkey.

French President Macron and Chinese leader Xi have announced fresh trade contracts worth $15 billion amid the ongoing trade war between the US and China. Macron and Xi also agreed to double down on climate change. (06.11.2019)