US state of California signs accord with China for green technology development | News | DW | 06.06.2017

The agreement comes less than one week after US President Donald Trump said the US was leaving the Paris climate accord. California governor Jerry Brown agreed to develop more green technology. 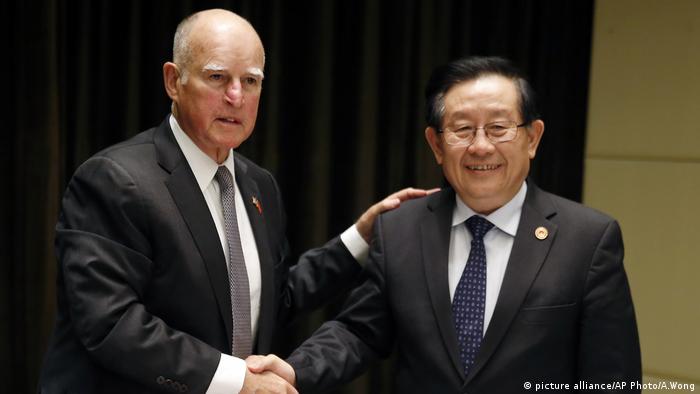 California governor Jerry Brown met with Chinese leaders on Tuesday in Beijing and signed a memorandum of understanding to develop more green technology and reduce greenhouse emissions. The agreement builds on subnational pacts Brown signed with officials in Sichuan and Jiangsu provinces earlier this week.

"I have proposed that California will cut its greenhouse gases 40 per cent below 1990 levels and that we'll have 50 per cent of our electricity from renewables," Brown told President Xi Jinping in a 45-minute meeting.

"To keep that goal, we need a very close partnership with China - with your businesses, with your provinces, with your universities," Brown said.

"Nobody can stay on the sidelines. We can't afford any dropouts in the tremendous human challenge to make the transition to a sustainable future," Brown said during a green energy conference in Beijing. "Disaster still looms and we've got to make the turn."

The agreement between California and China comes just days after US President Donald Trump announced the US was leaving the Paris climate agreement. Trump's announcement was met with condemnation.

Many US cities and states disagreed with Trump as well, and formed their own US Climate Alliance to continue to implement the Paris agreement in their respective areas. California is a part of that alliance.

Brown said Trump's decision did not come up in his meeting with the Chinese president.

"Xi (Jinping) spoke in very positive terms. I don't think there's any desire to get into verbal battles with President Trump," said Brown after his meeting.

Working towards a green future

California has some of the strictest climate controls in the US and has seen greenhouse gas emissions decline over the previous decade.

China emits the most greenhouse gases in the world. Nearly two-thirds of its energy comes from coal. Communist party leaders said they would invest at least $360 billion (319 billion euros) in green energy projects by the end of the decade. Party leaders said greenhouse gas emissions will peak no later than 2030.

Ma Aimin of China's National Center for Climate Change Strategy and International Cooperation warned that full cooperation between the US state and the Asian nation will not come easy.

"It will be a long time before there is true cooperation with California, whose market is just at a regional stage and is hard to link up with the Chinese market," said Aimin.

US Secretary of Energy Rick Perry also spoke at the conference in Beijing. Perry, a former Texas governor, said his agency was pursuing an "all of the above" strategy to curb greenhouse gas emissions. The plan included research on coal, nuclear and renewable energy.

Texas is the largest crude oil producer in the US, but has also invested in wind farms and solar energy.

Indian PM Modi said his country would uphold its commitment to the Paris climate agreement during his meeting with French President Macron. After Washington's withdrawal, India's support becomes crucial for the deal. (03.06.2017)