Senate Republicans are moving forward with Amy Coney Barrett's Supreme Court nomination, in the hopes that she'll be confirmed by the end of the month. Democrats have decried what they say is an "illegitimate" process. 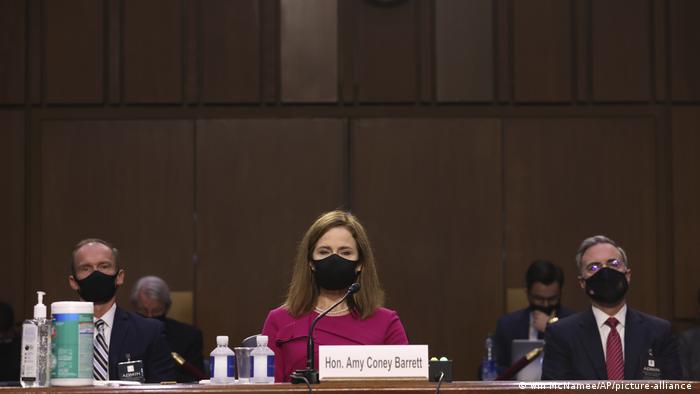 The US Senate began on Monday to consider Donald Trump's Supreme Court nominee Amy Coney Barrett, who was tapped to replace the late justice Ruth Bader Ginsburg. If confirmed, Barrett would receive a lifetime appointment.

The nomination comes just weeks before the US general election, where members of Congress, both House and Senate, and the presidency are on the ballot. It also comes as a wave of COVID-19 infections hit Republican circles, some of which were traced to the White House ceremony to announce Barrett's nomination.

"I believe Americans of all backgrounds deserve an independent Supreme Court that interprets our Constitution and laws as they are written," Barrett said in her opening statement to the Senate Judiciary Committee.

The committee met in person in Washington, DC, despite fact that one of its members, Senator Mike Lee, had tested positive for coronavirus over a week prior to the hearings.

Although Democrats had demanded a delay to the proceedings out of public health concerns, Republican Chairman Lindsey Graham decided to move ahead with what is the first step of Barrett's nomination.

Prior to the White House COVID-19 outbreak, Republicans had vowed to complete the nomination process before the November 3 election, while they hold a majority in the Senate.

Barrett's confirmation would give the court a 6-3 conservative majority, which critics say could entrench Republican policies or roll back Democratic-led ones for a generation.

Barrett addressed the criticism head-on in her opening statement. "Courts have a vital responsibility to the rule of law, which is critical to a free society. But courts are not designed to solve every problem or right every wrong in our public life," Barrett said.

"The policy decisions and value judgments of government must be made by the political branches, elected by and accountable to the people," she added.

Read more: Opinion: Donald Trump opts for a lurch to the right in the Supreme Court 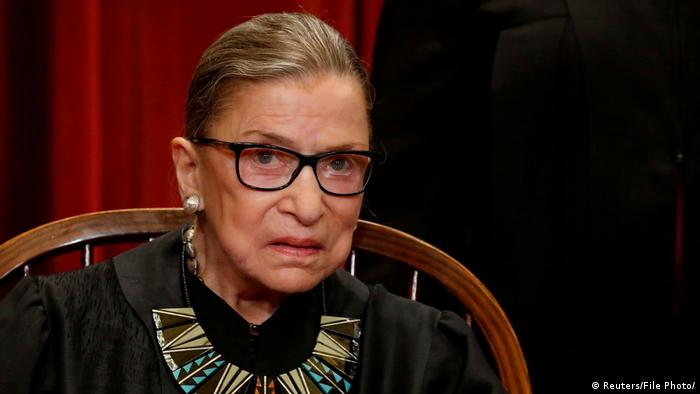 Ginsburg, who died September 18, was known for her support of women's rights, among other things

Democrats decried hypocrisy by Republicans, who in 2016 refused to consider former President Barack Obama's nominee for the high court, Merrick Garland, arguing that the nomination should wait for a new president to be elected.

Republicans now argue that it is the current president that should pick the nominee, despite it being just a month away from the presidential election.

Democrats accuse Republicans of wanting to impose a conservative majority in the judiciary, calling the process to nominate Barrett "illegitimate."

"If [senators] vote for Trump and he loses, and then Judge Barrett gets to the Supreme Court, this will be understood as a humiliating moment in the history of the constitution of the United States," US constitutional law scholar Bruce Ackerman told DW. "There is no question that if [Democrat rival presidential candidate Joe] Biden wins, the Supreme Court members will have to really think: Do they want to provoke a foundational crisis of the republic?"

Democratic Senator Kamala Harris, who is also her party's vice presidential candidate in this year's election, told the Committee that a Barrett nomination puts in jeopardy everything Ginsburg fought to protect, adding that aside from health care, voting rights, workers' rights, abortion rights and the very idea of justice were now at stake.

"A clear majority of Americans want (whoever) wins the election to fill this seat and my Republican colleagues know that," Harris said. "Yet they are deliberately defying the will of the people in their attempt to roll back the rights and protections provided under the Affordable Care Act."

Monday's hearing is the first of three to be held, as they will continue on Tuesday and Wednesday. If a majority of the Committee votes to proceed with the nomination, which it is expected to do, the nomination would land in the larger Senate chamber for a vote.

"This is going to be a long, contentious week," Graham acknowledged. "The bottom line here is that the Senate is doing its duty."

Does Trump have time to install a Supreme Court judge?

The death of Ruth Bader Ginsburg means that US President Donald Trump now has a chance to nominate a replacement. Even if he loses the election in November, could he still shape the Supreme Court?

The US Democratic presidential nominee has urged lawmakers not to vote on any candidate nominated to the Supreme Court. He called President Donald Trump's plan for an earlier vote an "exercise in raw political power."