The Trump administration has said it will freeze US assets belonging to the ICC chief prosecutor Fatou Bensouda and one of her aides. Washington is angry at the court's investigation of alleged war crimes by US troops. 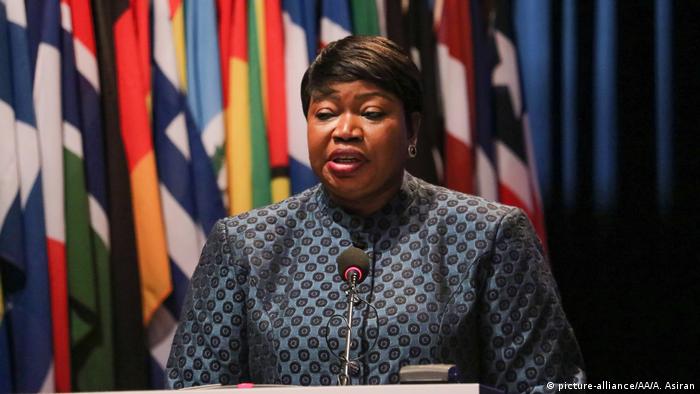 The US Trump administration has sanctioned the chief prosecutor of the International Criminal Court (ICC) over her investigation into whether US forces committed war crimes in Afghanistan.

Secretary of State Mike Pompeo said Washington would freeze US assets belonging to Fatou Bensouda as part of President Donald Trump's pushback against the Hague-based tribunal.

The US had already slapped a travel ban on the 59-year-old Gambian lawyer and other ICC officials over the probe.

"Today we take the next step, because the ICC continues to target Americans, sadly," Pompeo told reporters. "We will not tolerate its illegitimate attempts to subject Americans to its jurisdiction."

Read more: Will the EU stand up for the ICC?

One of Bensouda's top aides, the court's head of jurisdiction, Phakiso Mochochoko, would also be subject to an asset freeze, Pompeo said, warning that individuals and entities that continue to materially support the pair could be sanctioned as well.

The State Department has also placed visa restrictions on certain people involved in the ICC's efforts to investigate US personnel, Pompeo added, without citing any names.

At the time, the ICC expressed its "profound regret," saying "these attacks constitute an escalation and an unacceptable attempt to interfere with the rule of law and the court's judicial proceedings."

The ICC, to which the United States has never been a party, was founded in 2002 to investigate and prosecute individuals accused of genocide, war crimes, and crimes against humanity.

US Secretary of State Mike Pompeo lashes out at ICC, calling it 'a kangaroo court'.

Officials in The Hague decided in March to open an investigation into possible war crimes and crimes against humanity in Afghanistan between 2003 and 2014, including those allegedly committed by US forces and the CIA.

Washington had repeatedly warned that the Trump administration would take countermeasures if the probe went ahead.

Richard Dicker, the international justice director at Human Rights Watch, said it was "a stunning perversion of US sanctions, devised to penalize rights abusers and kleptocrats, to persecute those tasked with prosecuting international crimes."

"The Trump administration has twisted these sanctions to obstruct justice, not only for certain war crimes victims, but for atrocity victims anywhere looking to the International Criminal Court for justice,'' he was quoted as saying by the Associated Press news agency.