The United States is trying to silence judges on the court by threat of personal sanctions. European allies must not let that happen, says DW's Bernd Riegert. 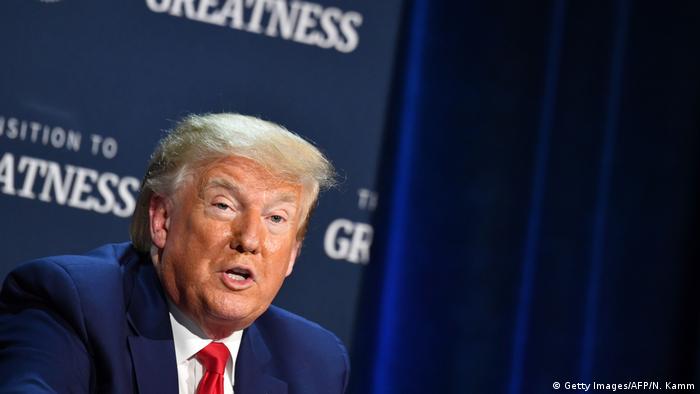 The Trump administration's full-frontal attack on the International Criminal Court (ICC) didn't come as a surprise to anyone. The idea of levying personal sanctions against judges, their employees and even their families has been discussed for more than a year now. Now, apparently, the time has come to make good on the threat.

In taking this step, the US has once again set its sights on another established international institution. The president is following his old playbook, and the move is a more serious one than the previous attacks on UNESCO, the WTO, the WHO or even the G20. Trump is trying to put his "America First" stamp on all those institutions with a combination of playing hard to get and making overt threats.

Not a 'kangaroo court'

The court in The Hague, Netherlands, is a supranational body supported by 123 countries. It was founded in 1998 to deal with the aftermath of genocide in Africa and the former Yugoslavia. The United States, like Russia, China, Iran and Israel all voted against its creation and never became members. That is also why the court has no jurisdiction over the US. Although US Secretary of State Mike Pompeo may like to derisively label the ICC a "kangaroo court," however, it is anything but. The ICC is an international institution that deserves respect – even from a populist secretary of state.

The fear the US has for the court — a trauma its NATO allies do not share — verges on paranoia. Donald Trump is not the first US president to set his sights on a court that could theoretically bring charges against US citizens. Bill Clinton suddenly withdrew a US request for membership at the ICC during his presidency and George W. Bush also said the court should be kept at bay.

Afghanistan is the bone of contention that prompted Trump to threaten sanctions against employees of the court. Investigators are said to be looking into actions taken by international troops there over the past 19 years. Afghanistan is a member of the ICC, and therefore falls under ICC jurisdiction.

No trials unless US cooperates

The ICC has been conducting preliminary investigations against unknown defendants. Possible war crimes committed by all sides — the Taliban, the Afghan military, various warlords, NATO-led forces and the US mission in Afghanistan — all deserve investigation. The court can only step in if the legal system of the country in question fails to act. Cases could only be brought against US citizens with the cooperation of the US government, which would have to extradite the accused to the ICC.

The fact that the US would never do such a thing makes cries that the court could engage in arbitrary miscarriages of justice seem a bit overwrought.

For years, the ICC was criticized for only dealing with cases in Africa. A number of African member states even threatened to leave the ICC, other countries on the continent never joined in the first place. Russia has resisted joining for fears of an investigation into its annexation of Crimea. Israel has criticized preliminary investigations into its occupation Palestinian territories. As one can see, the US is by no means alone.

The only difference between the US and everyone else? Trump's unprecedented tactics. His method of threatening judges and their families is a strange novelty coming from a Western democracy. In fact, it is unjustifiable and disgusting — and he must not be allowed to carry out his perfidious plan.

Neither NATO nor the EU can cave to his demands, that would be the end of the project of creating an international legal order. The "right" of the rule of law must carry the day, not the supposed "might" of the White House.

Opinion: #MeTooInceste — A blind spot, not just in France 15h ago