US, Russia maneuver to influence Ukraine′s political future | Europe | News and current affairs from around the continent | DW | 11.02.2014

With the US Congress reportedly preparing sanctions against Ukrainian leaders, Moscow has warned Washington to get out of the crisis in Kyiv. Has Ukraine become a proxy battleground between Russia and the West? 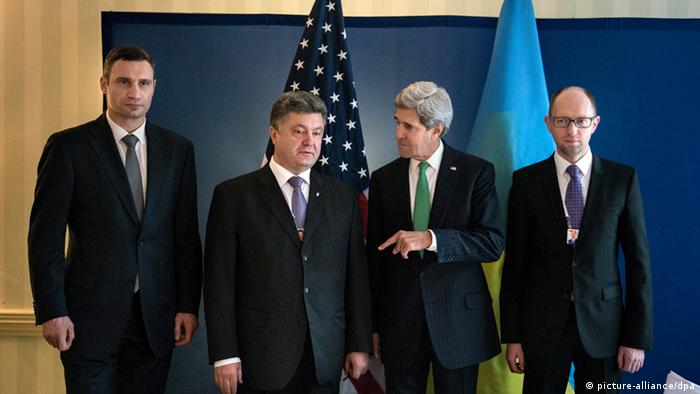 As the political crisis in Ukraine has escalated, EU and US efforts to support the opposition have gathered momentum. Washington is reportedly putting together a package of diplomatic carrots and sticks. US Assistant Secretary of State Victoria Nuland has said that Kyiv could receive US aid money, but only after it has implemented political reforms.

Meanwhile, the US Congress and the White House are reportedly discussing targeted financial sanctions against the Ukrainian public figures allegedly responsible for violence. In a resolution which passed in a 381-2 vote, the House of Representatives on Monday expressed support for the "democratic wishes of the people" in Ukraine.

"Rinat Akhmetov, the wealthiest oligarch, has been fairly close to Mr. Yanukovych," Pifer told DW. "I think it would be useful if Mr. Akhmetov was using his influence with President Yanukovych to encourage him to negotiate in a serious way to find a solution.

"If there was some threat that there might be financial or travel sanctions on Mr. Akhmetov, that could be a useful lever," he said.

So far, the EU has been reluctant to impose sanctions out of concern that punitive measures will only push Yanukovych further toward Moscow. In neighboring Belarus, for example, Western sanctions have done little to persuade strongman Alexander Lukashenko to reform his authoritarian regime.

But Andrew Wilson, an expert on Ukraine with the European Council on Foreign Relations, disagrees with the analogy.

"There aren't oligarchs in the same sense. You have a much more personal presidential system [in Belarus]," Wilson said. "Whereas in Ukraine you do have oligarchs, and you can hurt their interests."

Apparently unaware that their conversation was being recorded, Assistant Secretary of State Nuland and US Ambassador to Ukraine Geoffrey Pyatt discussed which roles would best suit each of the so-called "Big Three" opposition leaders.

Nuland and Pyatt agreed that former economy and foreign minister Arseniy Yatsenyuk has the political wherewithal to enter government, while world boxing champion Vitali Klitschko and right-wing Svoboda leader Oleh Tyahnybok should remain outside the official halls of power. 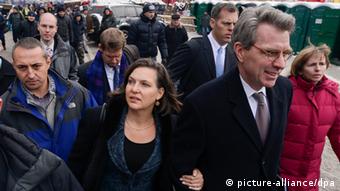 According to Eastern Europe expert Joerg Forbrig, the two US diplomats' conversation is an analysis of the players on the ground, not a specific roadmap for what a political transition in Ukraine should look like.

"I don't think it is an effort at prescribing a particular modus to the Ukrainian protest movement of whom they should put in the front seat and therefore create a government led by Yatsenyuk," Forbrig of the German Marshall Fund in Berlin told DW.

The taped conversation stirred controversy last week over dismissive comments made by Nuland regarding the EU's role in the crisis. Nuland said "f--- the EU," calling for the US to push forward with an UN-backed political transition in Ukraine.

"The Americans in their foreign policy agenda have a very full plate elsewhere in the world, and they are now being dragged into a region of the world where they thought the Europeans should well be able to handle situations like the one in Ukraine now," Forbrig said.

'Narrative of outside interference'

Shortly before the tape was leaked, President Vladimir Putin's advisor Sergei Glazyev went so far as to accuse the US of supplying the Ukrainian "opposition and rebels" with $20 million (14.6 million euros) a week to buy weapons and other supplies.

"There is information that within the grounds of the American embassy, there is training for fighters, that they're arming them," Glazyev said in an interview with the Kommersant-Ukraine Daily last week. 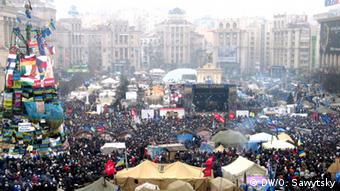 Forbrig: The US, EU do not finance the protests

But Ukraine expert Wilson called the Russian accusations "nonsense on stilts." Wilson said that Russia, which experienced its own cycle of anti-regime demonstrations last year, is trying to discredit the protesters in Ukraine.

"It's indicative of Russia's desperate need for the kind of narrative of outside interference to stick," Wilson told DW. "If the Russian people see that this is domestically organized then why can't the same thing be done in Russia? That's obviously Putin's fear."

The EU and US do openly finance civil society organizations that work for reform in Ukraine, including think tanks, human rights groups and media outlets, according to Forbrig.

Ukraine represents a key building block in Moscow's long-term strategy of establishing a sphere of influence in the former Soviet countries, according to Ambassador Pifer. Two-ex Soviet republics, Belarus and Kazakhstan, have already joined a customs union with Russia.

"Ukraine is a big piece of that and if Ukraine is not part of it that leaves a big hole," Pifer said.

Kyiv does not appear poised to join the customs union anytime soon. But Yanukovych did move Ukraine further into Moscow's orbit when he opted for a $15-billlion Russian loan instead of signing an Association Agreement with the EU last November. The agreement with the EU had been years in the making. 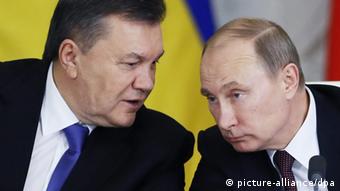 Ukraine is only the latest flashpoint where Western and Russian interests have clashed. Relations were already tense over the civil war in Syria and Russia's own domestic political situation. Some experts observe these trends and see an emerging East-West confrontation.

"People who these days talk about a new cold war are in my opinion mistaken because at the moment we do not see those proxy wars that we saw," Forbrig said.

For many activists in Kyiv, there's no longer any hope of finding a political solution with President Yanukovych. Some are now looking for help from the right - even if they don't share its ideology. (11.02.2014)

'We need a permanent EU mission in Ukraine'

Author Yuri Andrukhovych says the EU isn't paying enough attention to the situation in Ukraine. If democracy is to win in the current conflict, the bloc should set up a permanent mission, he tells DW. (10.02.2014)

Ukrainian journalists are fighting to create independent media in a bid to counter the influence of state-aligned news outlets. These journalists say government propaganda has escalated political tensions in Ukraine. (07.02.2014)