US ramps up pressure on reluctant South Korean ally

Washington wants Seoul to pay more to keep US troops on its soil and to extend military information sharing agreement — but South Korea is resisting the pressure. Analysts say it poses a security threat to the region. 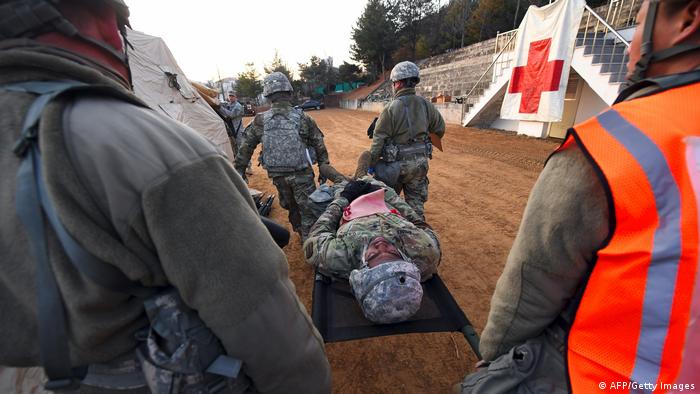 The United States is stepping up the pressure on South Korea on two fronts, with senior Washington officials in Seoul for a series of meetings in which they are demanding that South Korea agree to extend an agreement on sharing military information as well as submitting to a sharply increased annual figure to keep US troops in the country.

So far, however, the government of President Moon Jae-in has given no indications that it is willing to concede on either point, with analysts concerned that President Donald Trump could lose patience with diplomacy and — as he has threatened in the past — simply withdraw US forces from South Korea. And that, they fear, would have a serious long-term impact on the security and prosperity of the whole of Northeast Asia.

Moon met with US Defense Secretary Mark Esper at the presidential Blue House in Seoul on Friday afternoon, shortly after the US official held talks with his South Korean counterpart, Jeong Kyeong-doo. Esper reiterated Washington's position that South Korea should agree to extend the General Security of Military Information Agreement (GSOMIA), a three-way data-sharing pact with the US and Japan, which runs out in November 23.

South Korea announced earlier this year that it would not sign an extension to the agreement unless Japan agreed to lift restrictions on exports of chemicals that are critical to the South's all-important microchip industry. Tokyo imposed the restrictions and took South Korea off its "white list" of most-favored trading partners after Korean courts ruled that former forced laborers from the years of Japan’s colonial rule of the Korean Peninsula had the right to sue Japanese companies for compensation.

Tokyo insists that all compensation claims were settled under the 1965 treaty that saw the two nations normalize bilateral relations and saw Japan provide $500 million (€451 million) in compensation.

Unsurprisingly, the South Korean public is outraged at Japan's refusal to provide redress and no Korean politician can be seen to side with the former colonial overlord, so GSOMIA is likely to lapse — even though the biggest beneficiary of the agreement is South Korea and at a time when North Korea is returning to belligerence and more missile launches.

The US insists that Seoul pay a far larger amount to cover the costs associated with keeping 28,500 US troops in South Korea. President Trump has demanded that the figure rise from $5 billion (€4.52) a year from the $870 million (€786 million) that Seoul paid for calendar 2018. That deal runs out at the end of this year.

"It's extortion, pure and simple," said Daniel Pinkston, a professor of international relations at the Seoul campus of Troy University. "Back in the 1980s, I argued that South Korea, NATO and other allies should do more to share the burden, but to raise the annual figure by that much is like a mob boss going around for protection money."

And the row comes at a delicate time politically in both the US and South Korea, he said. With impeachment hearings under way and an election looming, Trump cannot afford to back down on his "America first" mantra, Pinkston believes, while South Korea goes to the polls in April and growing public anger at Washington's demands means that no Korean politician will advocate paying a $5 billion (€4.52 billion) bill for the US military every year.

"I can't see Seoul caving in and paying that," he told DW. "They would rather the American troops leave and then spend that money on developing nuclear weapons themselves."

"There's already a growing sense here that you can't trust the Americans any more — people look at what happened with the Kurds and they know that Trump doesn't care what happens in countries like Korea," Pinkston underlined.

"South Korea has the nuclear technology, it has the experts and it has the money, so developing their own nuclear deterrent would be fairly straightforward," he added. "But this is where it gets really dangerous. If the North sees the South building its own nuclear deterrent and the US has gone, then Pyongyang would have a very good incentive to attack."

Stephen Nagy, an associate professor of international relations at Tokyo's International Christian University, says Washington is ramping up the pressure in part because it wanted the GSOMIA pact to serve as the basis for a wider military intelligence sharing agreement "to counter the two primary security challenges in the region, namely North Korea and China."

And Nagy believes that the already considerable domestic discontent with Moon will inevitably grow as a result of the confrontation with the US.

"Recently, he has been losing support for his policies and his support rates are at record lows. Koreans know the importance of the bilateral alliance with the US, but they won’t agree to an increase of five times the cost of keeping the US troops there," Nagy told DW.

"That's going to come back on Moon, who they will see as having failed to handle the relationship well, on top of alienating the Japanese, causing economic problems at home and not stopping North Korea firing off 24 missiles so far this year already," he added.

"The stakes in these talks really are very high," Nagy said.