Ten days of military exercises with the US and Asian nations have started in Thailand. They come as US President Donald Trump asked South Korea to pay $500 million more for keeping US troops in South Korea. 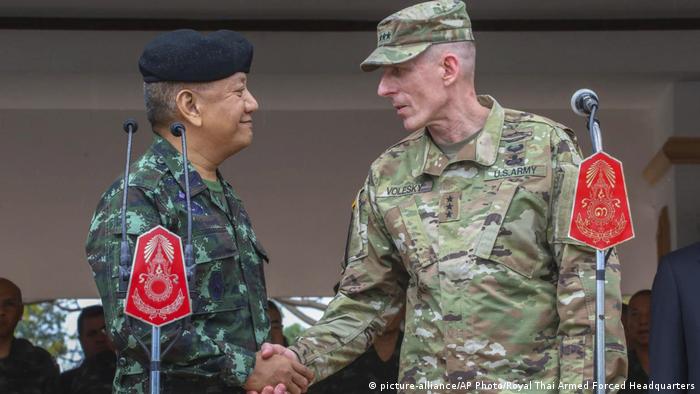 The opening ceremony for the annual Cobra Gold maneuvers launched the biggest exercise of its kind in the Asia-Pacific region, with 29 nations taking part as participants or observers over ten days until next Thursday.

In addition to Thailand and the US, seven other nations are actively participating: Singapore, Japan, China, India, Indonesia, Malaysia and South Korea. About 4,500 US personnel, on land and sea, are taking part.

The exercises continue until February 22 and are made up of three major components: military field training, humanitarian assistance and disaster relief training.

The goals include "enhancing maritime security, preventing and mitigating emerging disease threats, and responding to large-scale natural disasters," a US statement said.

Acting head of the US diplomatic mission in Thailand, Peter Haymond, said on Tuesday at the ceremony in the northern Thai province of Phitsanulok that the aim of the exercises, first held in 1982, was to strengthen cooperation and inter-operability.

The maneuvers come as US President Donald Trump suggested that South Korea had agreed to pay $500 million (€440 million) to share the costs of keeping about 28,500 American troops on South Korean soil.

"They were paying about $500 million for $5 billion worth of protection," Trump said at a cabinet meeting in Washington on Tuesday. "And we have to do better than that. So they've agreed to pay $500 million more."

But South Korean and American officials on Sunday signed an agreement that Seoul would increase its contribution to just about $890 million. This represents an increase of about $70.3 million.

Trump said the US-South Korea relationship was "great" but that the US lost "a tremendous amount of money" defending its ally.

Under the previous agreement, which lapsed amid disagreements in December, South Korea contributed 960 billion won ($855 million, €765 million) in 2018.

Increase not 'an established fact'

Presidential Blue House spokesman Kim Eui-kyeom said the agreement had been set for one year and could be extended if both countries decided to do so, the Korea Times reported.

"Therefore, the sides may decide to keep it at the current level after reviewing the need for an increase. And so, I hope [they] will not treat this issue of an increase as an established fact," Kim said.

The two sides had struggled to reach an agreement, despite at least 10 rounds of talks since March last year.

A US jet has landed in South Korea with what are thought to be the remains of American servicemen killed during the Korean War. Their repatriation was promised by Kim Jong Un to Donald Trump at their June summit. (27.07.2018)

The US does not want a "Cold War" policy towards China, US top diplomat Mike Pompeo said at a high-level summit with Chinese officials in Washington. The two sides traded blows over militarization in the South China Sea. (09.11.2018)