The US does not want a "Cold War" policy towards China, US top diplomat Mike Pompeo said at a high-level summit with Chinese officials in Washington. The two sides traded blows over militarization in the South China Sea. 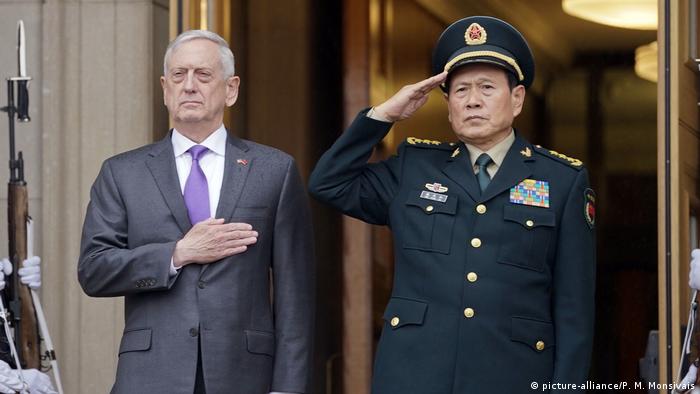 Beijing asked the US to end American freedom of navigation exercises in the South China Sea as top defense officials and diplomats from both countries met in Washington on Friday.

The US delegation, led by Secretary of State Mike Pompeo and Defense Secretary Jim Mattis, also discussed a string of other disputes between Washington and Beijing with top Chinese diplomat Yang Jiechi and Defense Minister Wei Fenghe.

Yang criticized the US over "militarization" of the South China Sea region, where US warships are regularly deployed near several Beijing-claimed islands. Using "freedom of navigation" as an excuse to send Navy vessels was "unjustifiable" as no shipping lanes or flights are being obstructed, Yang added.

"The Chinese side made it clear to the United States that it should stop sending its vessels and military aircraft close to Chinese islands and stop actions that undermine China's sovereignty and security interests," the Chinese official said.

In turn, US defense chief Jim Mattis said that the two militaries were looking to avoid "miscalculation" at sea. "And we made clear that the United States will continue to fly, sail and operate wherever international law allows," he said.

The American side also raised the issue of China's human rights record, with Mike Pompeo denouncing China's "repression" of minorities and citing a UN report that one million Muslim Uighurs have been rounded up into detention camps. He also criticized Beijing's actions in self-ruled Taiwan, which China considers to be one of its provinces.

However, Pompeo also said that "cooperation" between the two countries remained crucial, citing issues such as North Korea's nuclear program.

"The United States is not pursuing a Cold War or containment policy with China," Pompeo told a joint news conference.

"Rather, we want to ensure that China act responsibly and fairly in support of security and prosperity in each of our two countries."

The Washington summit was held amid high tensions between the US and China, after US President Donald Trump ordered $250 billion (€220.5 billion) worth of tariffs on Chinese goods and Beijing responded in kind. Last month, Beijing also rejected "ridiculous" US claims that it was interfering with the midterm elections.

The two sides chose to postpone the annual summit, which was originally set to be held in Beijing last month. While Beijing and Washington traded blunt messages on Friday, the talks are seen as an attempt to pave the way for the upcoming meeting between Trump and Chinese President Xi Jinping at the G20 summit in Argentina in late November.