US proposes punitive tariffs targeting $50 billion worth of Chinese imports

The Trump administration has escalated its trade showdown with China by announcing tariffs on an additional 1,300 technological and transport products. Beijing has vowed to respond with retaliatory measures. 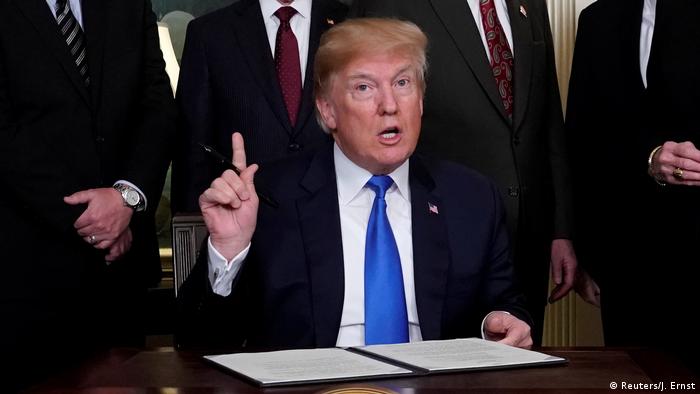 US President Donald Trump's administration on Tuesday unveiled a list of some 1,300 Chinese imports, worth an estimated $50 billion (€41 billion), which could be subject to an additional 25-percent tariff.

The list, announced by the US Trade Representative's (USTR) office, mainly covers nonconsumer products, ranging from chemicals to electronic components.

The USTR list of tariffs — an additional tax on imports — excluded several consumer-focused products, such as cellphones and laptops assembled in China, but would affect Chinese-manufactured flat-panel televisions and light-emitting diodes (LEDs), should it come into force. The proposed tariffs would also hit vehicles such as motorcycles and electric cars.

US Trade Representative Robert Lighthizer said the list was put together using a computer algorithm designed to impose the maximum pain on Chinese exporters but limit the damage inflicted on American consumers.

The tariff list would, however, have sweeping effects on the supply chains of several US manufacturers.

China boasted a $375 billion trade surplus on goods with the US in 2017, a figure Trump has demanded be cut by at least $100 billion.

A public comment period on the proposed tariffs is slated to last until May 11, followed by a hearing on May 15. Companies and consumers will be able to lobby the government to get certain products removed from the list or have others added.

Those fears have become exacerbated in the wake of Beijing's "Made in China 2025" program, which seeks to replace advanced technology imports with domestic products. China has denied that its laws and policies require technology transfers.

'There's no gain from trade war'

The US business community has long complained about China's intellectual property and technology transfer policies. In January, a federal court in Wisconsin convicted Sinovel Wind Group, a Chinese manufacturer of wind turbines, of stealing trade secrets from the US company AMSC and nearly putting it out of business.

However, even those who often criticize Chinese trade practices reacted cautiously to the proposed tariffs. "Tariffs are one proposed response, but they are likely to create new challenges in the form of significant added costs for manufacturers and American consumers," Jay Simmons, president of the National Association of Manufacturers, said in a statement.

Others warned that the sheer scale of the tariffs would likely see the US also end up being hurt. "If you're hitting $50 billion in trade, you're inevitably going to hurt somebody, and somebody is going to complain," said Rod Hunter, a former economic official at the National Security Council.

Kathy Bostjancic of Oxford Economics predicted that the tariffs "would have just a marginal impact on the U.S. economy" — provided they don't spark "a tit-for-tat retaliation that results in a broad-based global trade war."

The chances of such a trade war have become increasingly likely in the past week. The White House's latest move comes just a day after China slapped tariffs on $3 billion-worth of mostly agricultural US imports in response to earlier US tariffs on steel and aluminum products.

"We will prepare equal measures for US products with the same scale" according to Chinese trade law regulations, the ministry added.