US President Obama announces re-establishment of diplomatic relations with Cuba

US President Barack Obama has made a televised speech and announced the normalization of relations with Cuba. "Isolation has not worked. It's time for a new approach," the president said. 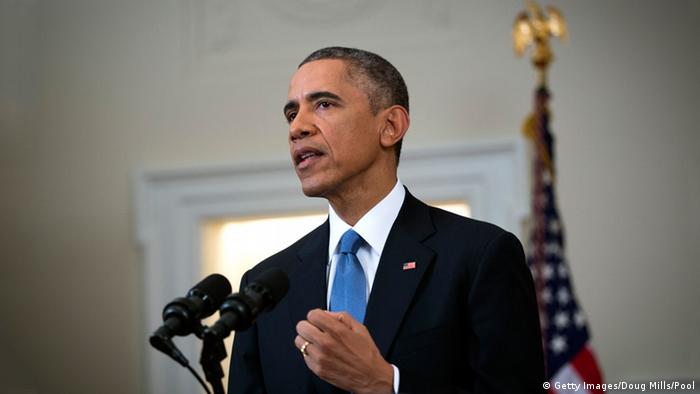 US President Barack Obama announced a change in US policy towards Cuba. He said Washington was realizing his wish to normalize relations with its southern neighbor, which has been blacklisted since the Cold War.

After a telephone call with Cuban leader Raul Castro, which lasted for over 45 minutes, Obama said diplomatic relations would be re-established for the first time since 1961.

In a televised address, he said a US embassy would be established in Havana and there would be cooperation between Washington and Havana on jointly tackling issues such as drug trafficking. He said the easing of sanctions will allow trade between the two countries. "Increased commerce is good for Americans and for Cuba," the president said.

With regard to development and civil liberties in Cuba, Obama said, "50 years of isolation has shown that this approach does not work."

"I do not believe we can keep doing the same thing for over 5 decades and expect a different result."

Obama also called on Cuba to lift restrictions on its population of 11 million. He said, today the US wants to be a part of making the lives of Cubans "more free, more prosperous."

President Castro addressed people at the same time in Havana, confirming the normalization in relations and the re-establishment of diplomatic ties.

"We have agreed to reestablish diplomatic ties after more than half a century," he said in a nationally broadcast address.

"We recognize having profound differences … we reaffirm our willingness to dialogue in all of these areas," the Cuban president added.

Castro also spoke of the release of other prisoners.

Earlier on Wednesday, Havana released US citizen Alan Gross from prison. The 65-year-old was arrested in Cuba in December 2009 while working as a subcontractor for the US Agency for International Development (USAID), which has been accused of trying to incite dissent and political change in Cuba through clandestine programs.

He landed in the US at Andrews Air Force Base near Washington, where he was greeted by his wife on Wednesday just before noon local time.

US announces historic thaw in relations with Cuba

The administration of US President Barack Obama has announced a normalization of ties with Cuba, which has been blacklisted in the US since the Cold War. This comes after the release of a US citizen from a Havana prison. (17.12.2014)

The AP news agency has reported that the US tried to undermine Cuba's government with a social media website called ZunZuneo. Expert William LeoGrande tells DW that US credibility in the region has been damaged. (04.04.2014)