US President-elect Biden pledges to unify nation in victory speech

Democrat Joe Biden told his supporters he "seeks not to divide, but to unify" the nation. He also said he would be announcing a panel of experts and scientists to tackle the coronavirus pandemic in a matter of days. 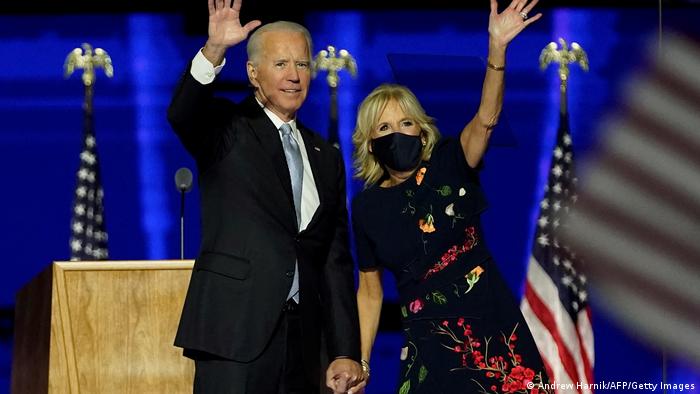 Joe Biden addressed his first rally as US president-elect in his hometown of Wilmington, Delaware, on Saturday night.

The Democrat, who defeated Republican incumbent Donald Trump in the November 3 election, told his supporters that he "seeks not to divide, but to unify" the nation.

"Folks, the people of this nation have spoken. They've delivered us a clear victory, a convincing victory," he added.

"I sought this office to restore the soul of America, and to make America respected around the world again and to unite us here at home."

Biden was declared victor on Saturday after he secured the required 270 Electoral College votes with a win in the swing state of Pennsylvania.

Trump has refused to concede, however, and has reiterated unsubstantiated claims of voting irregularities and fraud. He has also launched a number of legal challenges in states across the country, some of which have been rejected by courts.

Biden: 'This is the time to heal in America'

Biden pledged throughout the campaign to prioritize tackling the coronavirus, which has killed more than 230,000 people in the US — the worst-affected nation globally.

In his victory speech, he said he would be announcing a panel of experts tasked with addressing the pandemic as early as next week.

"On Monday, I will name a group of leading scientists and experts as transition advisers to help take the Biden-Harris plan and convert it into an actual blueprint that will start on January 20, 2021," he said.

Biden also made special mention of the African American community, saying that Black voters had stood up for him and boosted his campaign. "You've always had my back and I'll have yours," he told them.

He also acknowledged the disappointment of Trump's supporters, saying "they're not our enemies, they're Americans."

As the next president of the US, Biden faces a number of challenges, not least the pandemic and a struggling economy. He will also have to deal with promises to build a greener economy and ensure health care for all Americans.

Biden paid tribute to his family, especially his wife Jill Biden, who is an educator. He also thanked his running mate, Vice President-elect Kamala Harris, who kicked off the event in Wilmington and introduced him on stage.

"When our very democracy was on the ballot in this election, with the very soul of America at stake, and the world watching, you ushered in a new day for America," said Harris, who is of Jamaican and Indian origin.

"You chose hope, unity, decency, science, and, yes, truth. You chose Joe Biden as the next president of the United States of America."

Harris is set to become the first woman to take on the role of vice president of the US, and said she would make sure she "will not be the last."