President Trump offered to extend protections for some immigrants in exchange for $5.7 billion to build a wall at the Mexican border. A political standoff has lasted weeks and left 800,000 federal employees without pay. 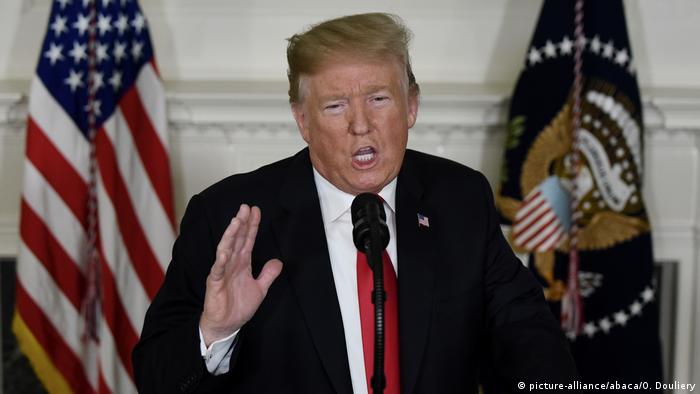 US President Donald Trump said he was putting forth a plan to solve what he called a "humanitarian crisis" on the Mexican border and immediately reopen the government.

Trump has been seeking $5.7 billion (€5 billion) to build a border wall and has vowed to keep the government shut until Congress approves the funds.

The government has been shut down since December 22, making this the longest shutdown in US history. The political impasse has affected 800,000 federal employees, many of which have been obliged to work without pay.

Read more: Counting the cost of the US government shutdown

'I want this to end'

In his speech Saturday from the White House, Trump was clear in reiterating the importance of the border wall: "As a candidate for president I promised I would fix this crisis and I intend to fix this crisis one way or the other." He said previous presidents had not made real progress on immigration, which had led to "tragic consequences."

He added that undocumented immigration reduced wages and put a strain on state resources. "I want this to end," Trump stressed, adding that it was time to "reclaim our future from the extreme voices" of the left that "favored open borders."

The plan, Trump said, represented "a compassionate response" to the crisis at the border.

Prior to the speech, the White House made the proposal public, stressing the DACA and TPS extensions. Both programs have been imperiled by Trump, as he sought to end them early in his presidency. The fate of more than 700,000 DACA recipients, young people who entered the US illegally before the age of 14, has rested on the courts since Trump announced his plan to end the program.

"His proposal is a compilation of several previously rejected initiatives, each of which is unacceptable and in total, do not represent a good faith effort to restore certainty to people's lives," Pelosi said.

Trump said that he would send the proposal as a bill to the Senate and that Republican leader Mitch McConnell had pledged to bring a bill to a vote this week. If passed, the president promised to hold weekly bipartisan meetings to work on a wider immigration reform compromise.

Meanwhile, Nancy Pelosi said House Democrats would vote next week on their own proposal, which would include "additional border security funding for ports of entry, advanced technology for scanning vehicles for drugs & immigration judges."

US shutdown: Trump, Pelosi feud over travel, State of the Union

Day 27 of the shutdown; the president and the speaker escalated their personal tit-for-tat. After Pelosi asked the president to delay his State of the Union speech he denied her permission to travel on a government jet. (17.01.2019)

As the US government shutdown reached its 20th day, Trump went to Texas to make his case for building a border wall. He wants $5.7 billion from US funds, and has said he might use emergency powers to finance the project. (11.01.2019)