Trump walks out on shutdown meeting with Democrats, says 'bye-bye'

Donald Trump held a brief meeting with Democrats at the White House but walked out when he was denied funds to build a border wall. Democrats have undertaken a renewed attempt to reopen some parts of the government. 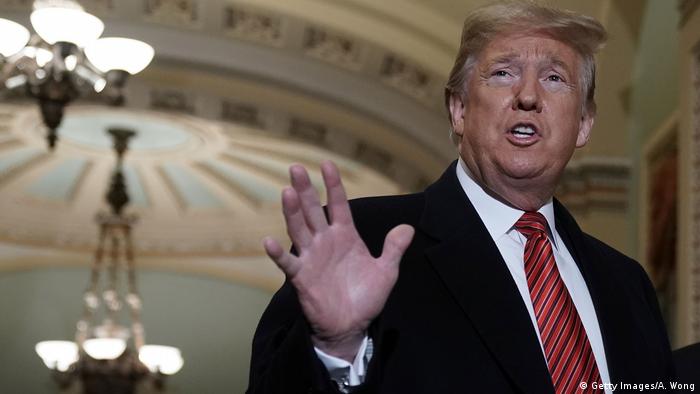 United States President Donald Trump walked out of talks to reopen the government with Congressional Democrats on Wednesday, increasing the likelihood that hundreds of thousands of government workers will not receive paychecks on Friday as scheduled.

On the 19th day of a government shutdown, caused by a dispute over funding for a border wall between the US and Mexico, Trump met briefly Senate Minority Leader Chuck Schumer and Speaker of the House of Representatives Nancy Pelosi in the situation room of the White House. The US president called the meeting "a total waste of time" in a tweet shortly afterwards.

Schumer accused the president of a "temper tantrum," telling reporters in Washington that the meeting broke when he and Pelosi refused to commit funding for the border wall. Trump then slammed his hand on the table and walked out, according to Schumer.

"This is sad and unfortunate. We want to come to an agreement. We believe in border security. We have different views," Schumer said.

Republicans provided a different account of the meeting, saying Trump passed out candy at the start of the meeting, did not raise his voice or pound the table. Vice President Mike Pence, speaking outside of the West Wing at the White House, accused Democrats of "unwilling to even negotiate."

"The president made clear today that he is going to stand firm to achieve his priorities to build a wall — a steel barrier — at the southern border," Pence told reporters. 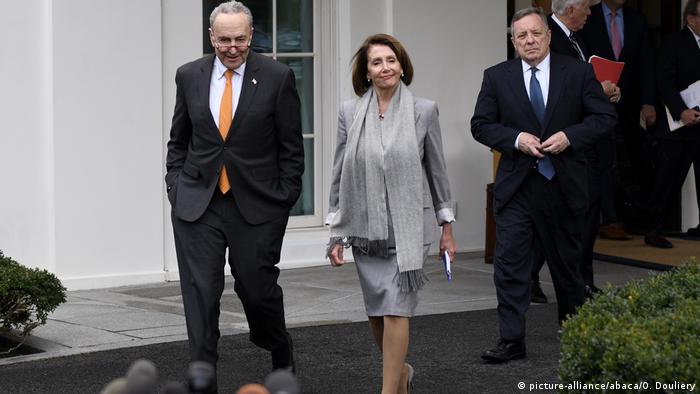 Shortly after the meeting at the White House, the House of Representatives, the lower house of US Congress, voted to pass legislation to open some departments of government, including the Treasury, Homeland Security, Justice, State, Agriculture, Commerce and Labor.

However, Republican Senate Majority Leader Mitch McConnell has said he would not put any funding bill up for a vote in Congress' upper house without Trump's backing.

Trump has insisted that the budget bill include a $5.7 billion (€4.9 billion) down payment on the wall, a barrier that he sees as absolutely necessary to stop what he calls an immigration crisis. Senate Democrats have remain steadfast in their refusal to include that provision in the bill.

Earlier Wednesday, Trump emerged from a meeting with Republicans on Capital Hill declaring he had unwavering support from his party for his tough stance on border wall funds. In the meeting, he told his fellow party members that the shutdown would last "whatever it takes."

Meanwhile, the suspension of government activities has lead to 800,000 federal workers either furloughed or working without pay. If the government shutdown does not end by Friday, many government employees will not receive their paychecks as scheduled.

On Thursday, Trump was scheduled to travel to the border to highlight what he calls a crisis of illegal immigration, drug-smuggling and human trafficking at the border.

The president has expressed his own doubts that his appearance and remarks on Thursday will change any minds.

The trip comes two days after a televised presidential address from the White House's Oval Office in which Trump said there is a "growing humanitarian and security crisis" at the US-Mexico border. He did stop short of calling a national emergency, which he has threatened to do in order to use emergency funds to bankroll the wall.

In a televised response to Trump's speech on Tuesday, Pelosi called the shutdown "senseless" and said the president was holding the country "hostage."

US government shutdown: No end in sight

US President Donald Trump canceled his holiday plans to stay in Washington as Democrats continue to reject his border wall funding demand. The US Senate will not meet until after Christmas. (23.12.2018)

The Trump administration has downgraded the diplomatic status of the European Union's delegation to the United States, an EU official has confirmed to DW. The demotion happened at the end of last year without notice. (08.01.2019)