US, Poland sign missile shield deal during Clinton visit | Europe| News and current affairs from around the continent | DW | 03.07.2010

Poland and the US on Saturday signed an agreement for a key missile base during a visit to Poland by US Secretary of State Hillary Clinton. She stressed the controversial deal 'is not directed at Russia.' 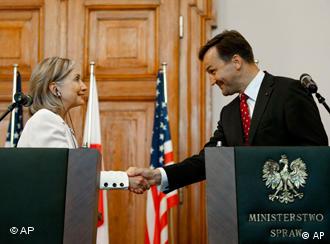 Clinton with her Polish counterpart Sikorski

US Secretary of State Hillary Clinton on Saturday oversaw the signing of the key missile base agreement as part of a revamped version of the controversial missile defense shield plan.

The amendment enables the establishment of a permanent US missile base on Polish soil. The controversial plan has been heavily criticized by Russia, with Moscow concerned that the policy is aimed at its military arsenal.

"This is a purely defensive system," Clinton told reporters. "It is not directed at Russia. It does not threaten Russia."

Poland and the US say the shield is designed to ward off the threat of missile attacks aimed at Poland and the rest of Europe, especially the possibility of a ballistic missile strike stemming from Iran.

The amendment was signed by Deputy Foreign Minister Jacek Nader and Lee Feinstein, the US ambassador to Poland. Clinton and her Polish counterpart Radoslaw Sikorski attended the signing.

Poland had agreed with the previous US adminstration led by George Bush to host a permanent US military base and missiles at a disused airstrip near the Baltic Sea coast.

The meeting, attended by some 70 foreign delegations, marked the tenth anniversary of the founding of the international 'Community of Democracies' organization.

The current political situations in eight nations, including Iran, Haiti and North Korea, were on the agenda.

Clinton, in the event's keynote speech, said the US joined Poland in mourning the victims of the plane crash in April that killed President Lech Kaczynski and 95 others.

Clinton arrived in Poland from Ukraine, which was her first port of call on a tour of eastern European countries. She will later visit Azerbaijan, Armenia and Georgia.

NATO Secretary General Anders Rasmussen has appealed for a joint missile defense shield with Russia to cover Europe and offer protection from a possible terror attack. But analysts are still cautious about its prospects. (20.04.2010)

Poland's recently announced plans to station a missile battery close to the Russian border have confused Russia's top foreign policy official, a day after Russia denied it would build up its defenses on the Baltic coast. (22.01.2010)

Poland is ready to take part in a revamped US missile defense system in which it would host SM-3 interceptors that target short and medium-range missiles. (21.10.2009)