US offers $10 million for information on Hezbollah leader

More than three months after the US killing of Iranian General Qassem Soleimani, the US has offered a huge reward for details on Mohammad Kawtharani, the Lebanese Hezbollah boss who has partially replaced him in Iraq. 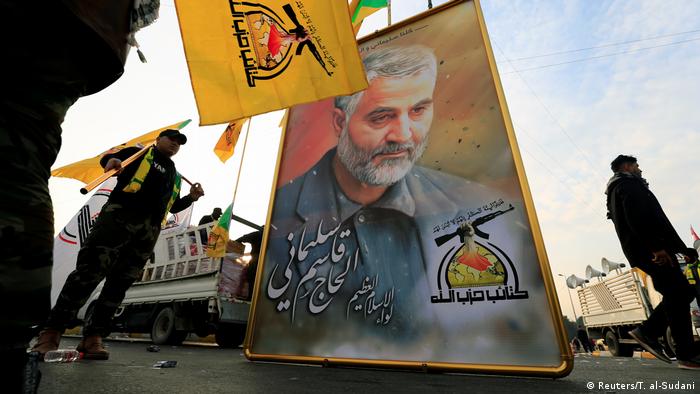 The United States has offered a $10 million (€9.4 million) reward for "any information" relating to a key Hezbollah commander.

Muhammad Kawtharani is a senior official of the Lebanese Shiite movement and is accused by the US of coordinating pro-Iran groups in Iraq. He was branded as a global terrorist by the US in 2013.

In a statement issued late Friday, the US state department said it suspects Kawtharani "has taken over some of the political coordination of Iran-aligned paramilitary groups formerly organized by Qassem Soleimani," referring to the powerful leader of Iran's Revolutionary Guard who was killed in early January by a US strike on Baghdad.

"In this capacity, he [Kawtharani] facilitates the actions of groups operating outside the control of the government of Iraq that have violently suppressed protests, attacked foreign diplomatic missions, and engaged in wide-spread organized criminal activity," the statement added.

The reward is being offered in exchange for "any information on his activities, networks and associates."

Kawtharani 'was trusted' by Soleimani

Despite his senior role in Hezbollah, Kawtharani may not have Soleimani's clout, according to a Shiite leader quoted by Reuters news agency.

Read more:Iran: Khamenei praises attack on US bases as 'day of god'

"Kawtharani has connections with the militia groups," the anonymous leader said. "He was trusted by Soleimani, who used to depend and call on him to help him in crises."

Hezbollah is a Shiite Islamist political party and military group based in Lebanon. Its Iraqi affiliate, Kataib Hezbollah, has been responsible for a number of attacks on US, Iraqi and coalition forces.

The Soleimani killing triggered the Iran ballistic missile attack, which resulted in traumatic brain injuries to more than 100 American troops.

109 US service members were injured in the Iran missile attack

The US had downplayed the effects of an Iranian attack on a US airbase in Iraq in an apparent bid to defuse tensions. However, the Pentagon has now admitted 109 service members suffered brain injuries. (10.02.2020)