The US military says it has sent two naval warships through the body of water that separates Taiwan from China. The transit came at a time of friction between Taipei and Beijing. 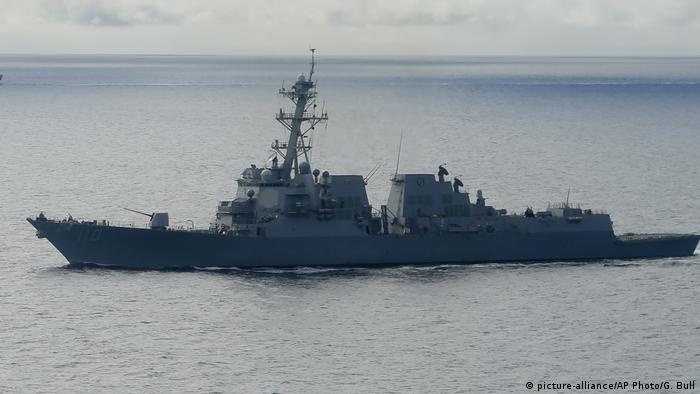 The US said it had sent two destroyers through the 112-mile-wide (180-kilometer-wide) strait on Sunday, to demonstrate Washington's commitment to maritime freedom in the region.

The move risks raising tensions with Beijing, and also comes as China ramps up assertions of sovereignty over the island. Beijing considers Taiwan to be an integral part of its territory.

"The ships' transit through the Taiwan Strait demonstrates the US commitment to a free and open Indo-Pacific," said a statement from Commander Clay Doss, a spokesman for the US Navy's Seventh Fleet.

Doss said there had been no unsafe interactions during the transit.

Taiwan's defense ministry confirmed that the ships had made the passage on Sunday, traveling from south to north.

"US ships freely passing through the Taiwan Strait is part of the mission of carrying out the Indo-Pacific strategy," it said.

While there was no immediate reaction from China, it's expected that the passage of the ships might raise further tension over Taiwanese-Chinese relations.

China has been keen to recently underline its territorial claim to the island, and last week complained to France after a French warship entered Chinese territorial waters while passing through the Taiwan Strait. The Chinese military has recently flexed its muscles,  putting a new aircraft carrier on show last week.

While the US has no formal ties with Taiwan, it is committed to helping Taiwan defend itself. Washington has sold Taipei weapons worth more than $15 billion (13.4 billion euros) since 2010, the Pentagon says.

China has repeatedly sent aircraft and ships to circle the island in drills over the past few years, while also seeking to isolate it diplomatically by bringing pressure to bear on other nations.