US lawmakers meet with Taiwan president on visit to Taipei

A bipartisan US Congressional delegation has arrived in Taiwan to meet senior leaders of the island. The visit, the second by US lawmakers this month, comes amid rising tensions between Taiwan and China. 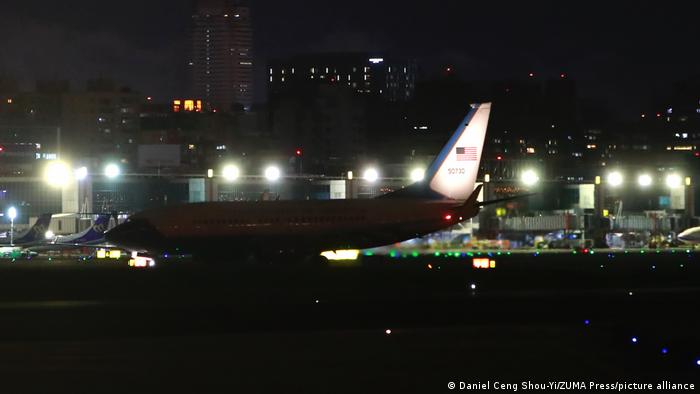 Five US lawmakers met with Taiwan’s President Tsai Ing-wen on Friday morning during their visit to Taipei to reaffirm Washington's support for the island.

The members of the US House of Representatives arrived in Taipei on Thursday night — the second congressional delegation to travel to the island this month.

Mark Takano, a Democratic lawmaker and chairman of the House Committee on Veterans' Affairs and leader of the bipartisan delegation, said the visit to the region was to remind partners and allies that they shared responsibility to ensure "a free and secure Indo-Pacific region."

"Madame President, I want to commend and praise your leadership. Under your administration, the bonds between us are more positive and productive than they have been for decades," he said during the meeting with Tsai at her office.

"Our commitment to Taiwan is rock solid and has remained steadfast as the ties between us have deepened. Taiwan is a democratic success story, a reliable partner, and a force for good in the world," Takano added.

Congresswoman Nancy Mace, the only Republican in the group, tweeted a photo of herself on the tarmac, with the words: "Just touched down in the Republic of Taiwan."

Taiwan is officially known as the Republic of China. But those who support its independence use the phrase "Republic of Taiwan" instead.

The self-ruled democracy is claimed by China as part of its territory, which Beijing has insisted that it must be "reunified."

Other members of the delegation included Colin Allred, Sara Jacobs and Elissa Slotkin.

The visit is the third one by US lawmakers this year and comes just days after President Joe Biden invited Taiwan to a planned democracy summit.

The invite led to an angry rebuke from Beijing which, in recent years has stepped up military and political pressure on Taiwan to accept its sovereignty claims.

"What the US did proves that the so-called democracy summit is just a pretext and tool for it to pursue geopolitical goals, suppress other countries, divide the world, serve its own interest and maintain its hegemony in the world," China's Foreign Ministry spokesperson Zhao Lijian said Wednesday.

The US remains one the key backers of Taiwan and its biggest supplier of arms, despite switching recognition to Beijing in 1979.

Taiwan - A Laboratory for Democracy in the Shadow of China

For China, it’s a renegade province that must be brought into line. The Taiwanese, on the other hand, see themselves as a legitimate, independent, democratic state.