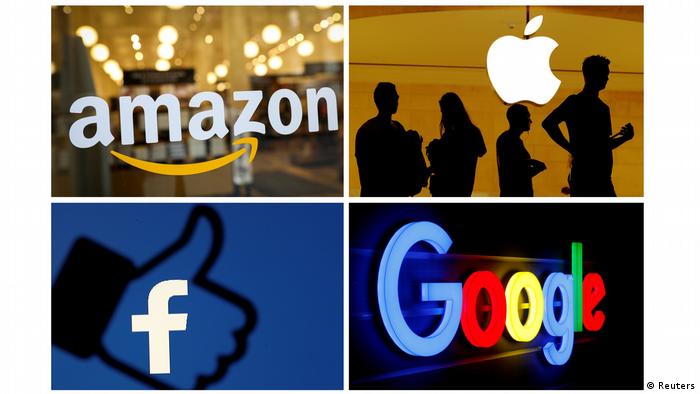 The landmark 450-page report from the House Judiciary Committee was released on Tuesday following a 15-month investigation.

"To put it simply, companies that once were scrappy, underdog startups that challenged the status quo have become the kinds of monopolies we last saw in the era of oil barons and railroad tycoons," the report said.

Judiciary Committee chairman Jerrold Nadler and antitrust subcommittee chairman David Cicilline said in a joint statement that the tech companies "each possess significant market power over large swaths of our economy" and have "exploited their power of the marketplace in anticompetitive ways."

The report called for Congress to pass legislation to rein in tech giants that would possibly force them to break up their businesses and make it harder for them to acquire new ones. The report's recommendations would be a massive regulatory shakeup for the industry.

The report also called for the platforms to be required to offer equal terms for equal products and services for all users. It called on Congress to boost the enforcement powers of antitrust regulators, including the Federal Trade Commission (FTC), and increase the budget of the commission and and Justice Department's antitrust division.

Were the proposals to be taken on by lawmakers, they would be the biggest changes to antitrust laws for tech companies since the federal government's case against Microsoft nearly 20 years ago.

The four companies have faced scrutiny for years with their business practices. For example, Facebook has been criticized for its lack of quality control and its use of user data, while purchasing other social media companies Instagram and WhatsApp within the past decade.

All four companies were called before Congress over the summer to make their case as part of an antitrust probe.

Republicans members of Congress did not sign off on the recommendations from the House Judiciary Committee report, instead issuing their own version entitled: "A Third Way to Take on Big Tech."

The separate report called for more "targeted" enforcement of existing antitrust laws when compared to "onerous and burdensome regulation that kills industry innovation."

Ohio representative Jim Jordan called the House Judiciary Committee report the "Democrats' partisan report" which "advances radical proposals that would refashion antitrust law in the vision of the far left."

While Democrats have criticized the growing power of tech companies, Republicans have decried what they consider to be a bias against conservatives in Silicon Valley.

Tech companies criticized the committee's findings, and decried attempts to impose regulation by saying it would harm consumers.

Google took issue with both reports, saying in a statement that they contain "outdated and inaccurate allegations from commercial rivals" about the company's search engine and other services.

In anticipation of the report Amazon said in a blog post that "fringe notions on antitrust would destroy small businesses and hurt consumers."

Matt Schruers of the Computer & Communications Industry Association, a trade group including some of the major tech firms, said the report showed lawmakers did not understand the digital economy.

"If the goal is simply to knock down successful US businesses, then perhaps this plan would score a hit," said Schruers.

"But it the goal is to benefit consumers, which has until now been the standard for antitrust policy, it is hard to see how this would do anything but invite regulators to micromanage business models."

Jan Koum, the co-founder of WhatsApp, announced that he will be leaving the messaging service and its parent company Facebook Inc. Koum reportedly clashed with Facebook over plans to use WhatsApp users' personal data.