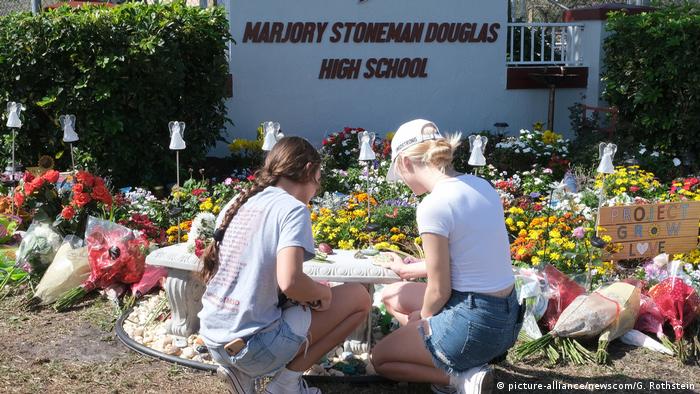 In 2018, a gunman shot and killed 14 students and three staff members at Marjory Stoneman Douglas High School in Parkland, Florida

With the spread of the coronavirus, 2020 was a year of uncertainty. In the United States, it was also a year of record gun sales. Even people who had never owned a firearm made their way into gun stores.

Roughly 40% of gun sales in the first four months of 2020 (pandemic lockdowns in the US began in March) were made by first-time buyers — far higher than the annual average of 24% over the past 20 years, according to the National Shooting Sports Foundation, a trade association that tracks gun sales.

There are a variety of reasons as to why so many people in the US are buying guns. For Erin Palette, it's self-defense.

"There are people who wish to end my life because I am queer," said Palette, the national coordinator of the Pink Pistols, an organization that advocates for LGBTQ gun owners, in an email to DW. "Guns allow me to defend my queer life."

She believes it's crucial that a person's right to own firearms isn't infringed upon. "People want guns to protect themselves and their families in a crisis where the police may be late to arrive," she wrote. 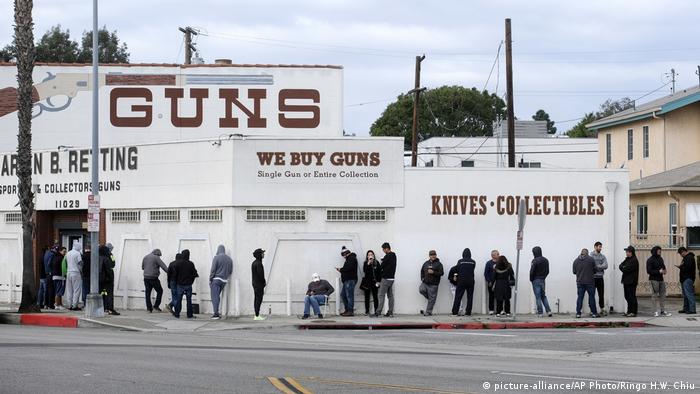 Guns and ammunition have been highly sought-after in the pandemic, like at this gun store in Culver City, California

No significant changes since Parkland shooting

On the other side of the spectrum, gun-control activist groups like Everytown for Gun Safety and its grassroots networks, Moms Demand Action as well as Students Demand Action, are lobbying for stricter laws to curb gun violence, which they say kills more than 100 Americans a day and injures many more.

"In an average month, 53 American women are shot to death by a partner. I have watched this issue in this country for too long," Shannon Watts, the founder of Moms Demand Action, told Forbes.

In 2018, there was a big push for stricter gun laws after the February 14 school shooting in Parkland, Florida. On Valentine's Day of that year, a former student walked into Marjory Stoneman Douglas High School and shot and killed 14 students as well as three staff members. In the aftermath, the Democratic majority in the US House of Representatives passed tighter firearms legislation ― which was then blocked by the Republican-controlled Senate at the time.

On the third anniversary of the shooting on Sunday, President Joe Biden announced that his administration would try again. He praised the Parkland students, who in 2018 organized the March for Our Lives protest in Washington, DC, that sparked satellite marches around the world, saying young people like them are shaping US history and demanding change.

"This administration will not wait for the next mass shooting to heed that call," Biden said in a White House statement. "We will take action to end our epidemic of gun violence and make our schools and communities safer… The time to act is now."

The president in his statement called on the House and the Senate to pass "commonsense" gun law reform. Biden suggested measures such as background checks on any and all firearm purchases; banning assault weapons like the AR-15, which has been the weapon of choice for perpetrators of mass shootings, including in Parkland; and banning high-capacity magazines.

Biden cannot instate these proposed regulations himself ― that's where Congress comes in.

"Now that the Democrats have won the House and the Senate (if we count the tie-breaking vote), it looks like he has a fair chance of getting serious legislation passed," Claire Boine, a researcher at the Boston University School of Public Health and an expert on US gun culture, wrote in an email to DW.

Boine believes that universal background checks are likely to become law, but that a ban on assault weapons is a lot harder to achieve. "Gun owners usually oppose these policies because they don’t think they are fair," she wrote in her email. "They support preventing criminals from getting guns. However, they oppose any legislation that restrict their own access to certain firearms."

The US: More guns than people

The US is famous for the passionate relationship the country has with guns. There is no federal registration requirement, so no one can say with certainty how many handguns there are in the US. But according to a 2017 Pew survey, 42% of Americans said they lived in a household with a gun. And the Switzerland-based Small Arms Survey estimates that US civilians own 393 million handguns. With a population of roughly 331 million people, that means the US has the most firearms per capita worldwide: 120.5 firearms for every 100 people. 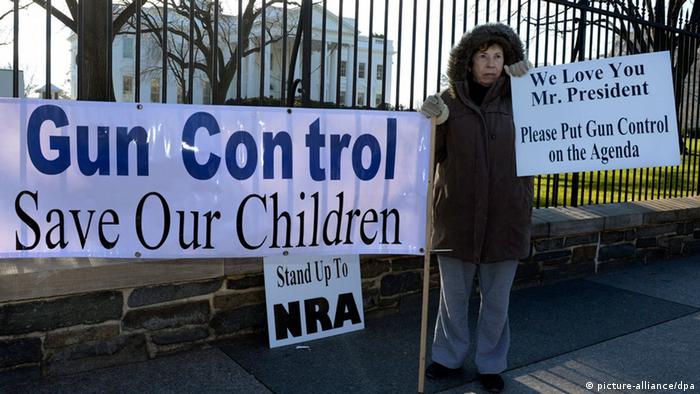 Palette is not a fan of Biden's proposed measures. "Gun control makes it more difficult for queer people to defend themselves," she wrote in her email. Palette also stated that it's a risky political move by Biden and the Democrats to lean into gun control after a year that saw gun purchases soar. The midterm election, where all House representatives and one-third of the Senate are up for reelection, is next year, after all.

"I think it would be very dangerous for Democrats' re-election chances to seriously push gun control right now," Palette wrote. "The economy and COVID-19 are bigger and more important problems."

Moms Demand Action founder Watts has welcomed Biden's proposition. "These recommendations are a welcome change from the inaction of the Trump administration over the past four years," she said in a statement released Tuesday.

"Families across the country impacted by gun violence — including the Parkland victims and survivors — have been waiting for this day for far too long."

Revealed: How the US gun lobby exploits the coronavirus pandemic to further its aims

An investigation into protests against coronavirus restrictions in the US revealed a tale of coordinated political action by gun lobbies, and one Florida man who was trying to get ahead of the curve.

Biden calls for US gun law reforms on Parkland anniversary

US President Joe Biden has urged Congress to pass reforms to reduce gun violence as the country marks three years since the Parkland school shooting. "The time to act is now," he said.

Jurors are set to decide on a death sentence or life in jail for the 23-year-old who pleaded guilty to killing 14 students and three staff members at a school in Florida in 2018.

The first family will meet with community and religious leaders, as well as those who lost their loved ones to the violence that left 21 people — including 19 children — dead at Robb Elementary School in Uvalde, Texas.

The vote by the Democratic-majority House was a direct response to recent mass shootings in the US. The bill has little chance of progressing in the Senate because of Republican opposition.