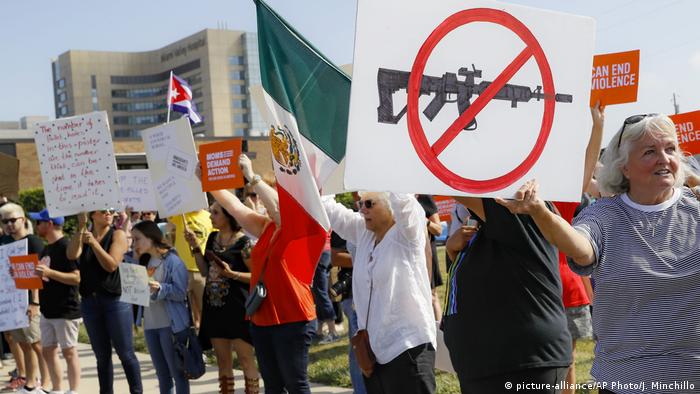 Senate Majority Leader Mitch McConnell rejected calls on Thursday for reconvening the Senate, which is currently in its August recess, to vote on measures to address gun violence, in the wake of the shootings in Dayton, Ohio and El Paso, Texas.

Democrats, gun-control activists, and 214 city mayors had publicly urged McConnell to bring senators back to DC to vote on the issue.

"The tragic events in El Paso and Dayton this weekend are just the latest reminders that our nation can no longer wait for our federal government to take the actions necessary to prevent people who should not have access to firearms from being able to purchase them," the United States Conference of Mayors wrote in a letter to the Republican Senate leader.

Democratic House Speaker Nancy Pelosi went as far as to ask President Donald Trump to use his constitutional powers to call the Senate back into session immediately.

In February, the Democratic-led House of Representatives passed two bills calling for universal background checks for gun buyers, neither of which have been brought up for a vote in the Republican-led Senate.

'Anxious' for an outcome

But McConnell said calling senators back to Washington would just lead to people "scoring points and nothing would happen."

Instead, the GOP leader said he wanted to spend the August recess talking with Democratic and Republican senators about possible solutions that can be turned into a law.

During an interview to a radio station in his home state of Kentucky, McConnell said that President Trump was "anxious to get an outcome and so am I."

"We're going to have these bipartisan discussions and when we get back (from the recess), hopefully, be able to come together and actually pass something," McConnell said

But when asked about specific measures supported by Democrats, such as restrictions on assault weapons, McConnell said that while they would be addressed, measures Trump has proposed, such as background checks and so-called red flags "would probably lead the discussions."

The National Rifle Association (NRA), which is an important donor for many Republican senators, reaffirmed on Thursday its commitment to oppose any further gun restrictions.

US newspaper The Washington Post reported that NRA chief Wayne LaPierre called Donald Trump this week to tell him a background check bill would not be popular with his supporters.

"I'm not inclined to discuss private conversations with President Trump or other key leaders on this issue,” LaPierre said in a statement.

"But I can confirm that the NRA opposes any legislation that unfairly infringes upon the rights of law-abiding citizens,” he stated.

"The inconvenient truth is this: The proposals being discussed by many would not have prevented the horrific tragedies in El Paso and Dayton," LaPierre argued.

The human rights organization warns gun violence has led to a "human rights crisis" in the US. The killings of 31 people in attacks at the weekend have renewed pressure on President Trump to strengthen gun controls. (08.08.2019)

The US president has visited two cities hit by mass shootings, with the El Paso attack being probed as a hate crime. Ahead of his trip, Trump claimed there was "no political appetite" for an assault rifle ban in the US. (07.08.2019)

Donald Trump is considering action to prevent mass shootings after a total of 29 people were killed in attacks in Texas and Ohio. Democratic candidates say the president encouraged the gunman in El Paso, Texas. (05.08.2019)