Americans stock up on guns and ammo amid coronavirus pandemic | Americas | North and South American news impacting on Europe | DW | 03.04.2020

Americans stock up on guns and ammo amid coronavirus pandemic 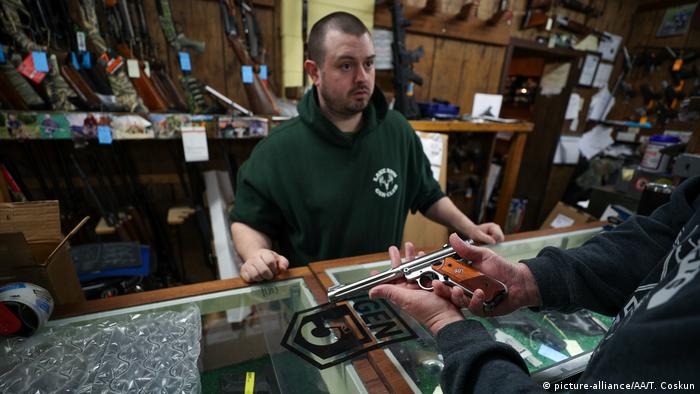 These days, the answering machine is getting a lot of work at Greta's Guns in Simi Valley, California: "Due to high call volume, we cannot answer the phones at this time. We'll be open during normal business hours until further notice," as the machine informs customers. "The best way to reach us is via email or Facebook messenger." Conveniently, the gun shop is located just around the corner from a Walmart and a church.

In mid-March, Alex Villanueva, the sheriff of Los Angeles County, announced that all nonessential shops should be closed. Simi Valley is in Ventura County, which neighbors LA County. Villanueva's announcement upset gun owners and potential buyers. On March 28, the sheriff revised his message: According to a memorandum issued by the federal Department of Homeland Security, the import, manufacture and sale of weapons are part of the US's essential infrastructure.

As in many other countries, store shelves in the US have been largely empty since citizens became aware of the outbreak of COVID-19 in March: Toilet paper and hygiene products are hard to come by, and pasta and rice are sold out in many places, too. But uncertainty and fear have not only driven Americans to hoard food and household items: Weapons and ammunition are also in high demand. 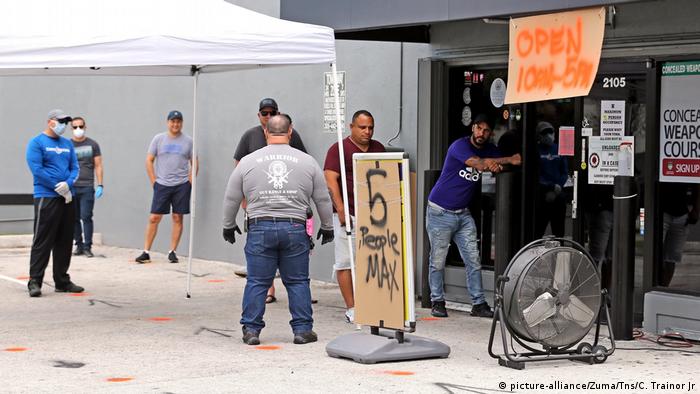 Customers line up six feet apart outside a gun store in Doral, Florida

"We had a rise in sales," Josh Lowry, the owner of Oregon Rifleworks, told DW. "It's been a lot of new sales to new customers." His gun shop in Tigard is just 10 miles (16 kilometers) from the center of the Pacific Northwest's largely liberal city of Portland. Lowry says customers have been buying shotguns, pistols and rifles. The store also has a hunting department and sells ammunition and knives. "People are worried for their safety," Lowry said. "They are worried about police being busy doing other things. So they are forced to be a little more self-reliant."

Read more: Eight facts about gun control in the US

Most of the weapons on the Oregon Rifleworks website are sold out at this point, and the store recently took to Facebook to announce shorter opening hours: "It's been a rough few weeks here as you can imagine. We are still open but have changed our hours so we can get caught up on inventory, putting the store back together, paperwork and gun work. We simply cannot keep running at ludicrous speed."

Part of the paperwork in gun stores includes running background checks to determine whether a person is legally clear to purchase a firearm. The FBI manages a database with criminal records that is used to complete background checks. The number of requests is at a record high. In February, the FBI ran more than 2.8 million background checks, compared to an average of just over 2.36 million per month in 2019.

Firearm and ammunition sales in the United States are regularly driven by current events: The election of President Barack Obama was one; the March for Our Lives protests against gun violence in 2018 were another. The March for Our Lives movement, for instance, saw people from around the country take to the streets to call for stricter gun laws, which in turn drove up sales.

In recent weeks, there have been long lines in front of gun shops in several US states. These were not only caused by a higher number of customers. They are also the result of state mandated or self-imposed rules that limit the number of people that can shop at the same time. In some places that number is 10; Oregon Rifleworks currently only allows six customers at a time. 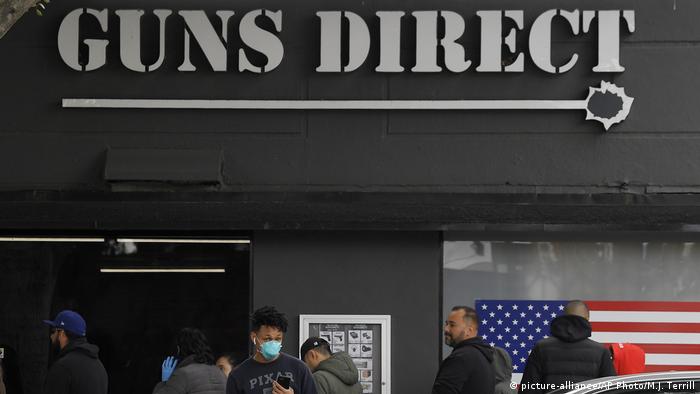 Nothing helps the gun industry more than a global crisis

Drew Woods lives in Louisiana. He currently has a job on a tugboat, and comes from a family that has always loved hunting and fishing. His first gun was given to him as a gift when he was about eight years old, at 14 he got his own hunting rifle. "I started buying my own when I turned 18, and I have been concealed carrying every day since 2009," he told DW. Woods feels safer that way. For a while he carried his gun openly but eventually stopped because people were "acting 'funny' around civilians with guns on their hips, or flat out getting scared and panicking, as if I was going to rob or shoot someone." Like others, he is concerned that the corona crisis could overwhelm the police force.

Woods says his concerns grew stronger when he recently stumbled upon a troubling notice from the police in Cincinnati, Ohio. Officials in the city announced that officers would adhere to social distancing guidelines whenever possible, and publicly declared that officers would no longer respond to emergency calls personally. Instead, people were asked to file reports over the phone or online. However, the official statement also noted that police would continue to respond to emergency calls in person if suspects were still at the scene of the crime or medical assistance was needed.

Dennis Williams lives in the state of New York. He was raised in a liberal household and considers himself to be liberal as well. About a year ago he decided to purchase a pistol. He had been thinking about it for a while, but kept putting it off. Eventually, he started to worry that new laws might ultimately keep him from getting one. So, after extensive research, the 51-year-old decided to buy a Walther PPK/S .380 ACP. Williams has children and the Walther PPK was advertised as a safe choice. The model was originally developed in Germany in the early 1930s, and is a popular choice for self-defense among gun owners in the US.

Williams recently bought a considerable amount of ammunition for his gun in an effort to beat the rush and avoid being confronted with empty shelves. "I fear looting and other crime increases in the future. And the likelihood of running into once very rare situations where one would need to rely on the protection of a firearm will increase."

Paul Broshear is another person who prefers to err on the side of safety. He says he has enough guns and ammunition at home so he decided to give some to other family members — "just in case." Broshear said he wanted, "to be sure they are adequately armed." In his opinion, the best would be if the guns and ammunition never had to be used. He says he would rather have his grandkids wondering what the "idiot old fart" was thinking. Every time Broshear gives a firearm to a family member he also gives them a letter insisting that all guns remain in the family, passed on from generation to generation, and never be sold to strangers.

When will the guns in Africa be silenced?

Silencing the guns by 2020 — that was the proclaimed goal of the African Union back in 2016. A goal which many experts believe is unattainable, especially if illegal arms trade continues to flourish. (04.01.2020)

The Czech Republic had challenged the ban on semi-automatic rifles for private use. But measures taken by the European Parliament and the European Council do not breach legal principles, says the EU's top court. (04.12.2019)

Police and citizens braced for violence as pro-gun activists streamed in from across the US to join the demonstration. Many were protesting a proposed set of reforms to limit firearm ownership in the state. (20.01.2020)

A group of Democrats and Republicans in the bitterly divided United States Senate have agreed to push forward new legislation aimed at reducing gun violence. Jake Charles, Executive Director of the Center for Firearms Law at Duke University tells William Glucroft on The Day this is 'a significant moment in the gun debate in the US'.