US, Europe Consider Sanctions Against Zimbabwe | Europe | News and current affairs from around the continent | DW | 28.06.2008

US, Europe Consider Sanctions Against Zimbabwe

Zimbabwean President Robert Mugabe is expected to be sworn in on Sunday after winning an election boycotted by the opposition. The international community has called the election a farce and threatened sanctions. 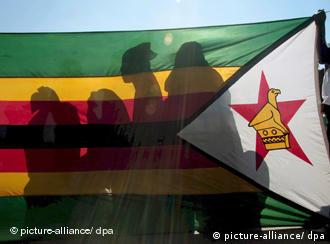 Robert Mugabe is ceratin of a landslide victory

Government sources in Harare have told reporters that Robert Mugabe won the June 27 run-off election by a huge margin of the vote. The election, which was boycotted by the first-round winner and opposition leader Morgan Tsvangirai after nearly 90 supporters of his Movement for Democratic Change (MDC) were killed in attacks, has been widely denounced as a sham.

"A run-off election without an opponent is a farce and incapable of providing legitimacy," Frank-Walter Steinmeier said in Berlin, a day after voters in the southern African country went to the polls.

"The extent of the violence and intimidation surrounding the election yesterday reveals the depths that Robert Mugabe has led his country into," he said. 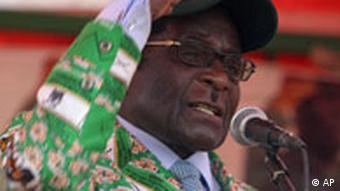 Mugabe, who has led the former British colony of Zimbabwe since its independence in 1980, staged the run-off presidential election in defiance of world-wide condemnation.

In a statement issued on Saturday, the European Commission said it "condemns in the strongest terms the organization of a run-off in Zimbabwe despite repeated appeals by African and international authorities for a postponement."

US Calls for Sanctions

US President George W. Bush was also quick to denounce the fraudulent ballot Saturday and announced drawing up sanctions against the Zimbabwe regime given its "blatant disregard for the Zimbabwean people's democratic will and human rights."

Bush said he would call on the United Nations to impose an arms embargo on Zimbabwe and a travel ban on its officials.

The European Union said it would not rule out sanctions against those responsible for Zimbabwe's political crisis. The bloc is urging President Robert Mugabe to respect the results of the first-round presidential election held in March and won by opposition leader Morgan Tsvangirai. 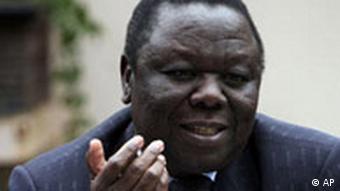 Morgan Tsvangirai, leader of the main opposition party in Zimbabwe

It has said in a statement released Saturday that the March 29 poll was the only lawful ballot held in the country this year, and may serve as a basis for an acceptable solution to crisis.

In the meantime, the EU said, Europe will not rule out sanctions against "those responsible for the tragic events of recent months," and called the power held by Zimbabwe's current elected representatives "questionable."

In 2002 after Mugabe allegedly rigged his re-election, the United States and the EU imposed sanctions against the president's inner circle, including a travel ban and a freeze on bank accounts.

Many Western leaders have urged the African Union to take action at a summit in Egypt on Monday that was expected to focus on the Zimbabwe election crisis.

But African ministers expressed doubts about more sanctions, saying they will not work and that the world should focus instead on encouraging talks towards a power-sharing deal, several African officials said on Saturday.

"History has shown us that they (sanctions) don't work because the leadership just dig in and dig in and feel persecuted," Kenyan Foreign Minister Moses Wetangula told reporters at a meeting of African foreign ministers ahead of the summit.

The final round of Zimbabwe's presidential election with only one candidate was "a farce," German Foreign Minister Steinmeier said Saturday, June 28. The US says it will introduce a UN resolution next week. (28.06.2008)

Germany's Human Rights Commissioner Guenter Nooke called the political crisis in Zimbabwe a tragedy. In a DW-WORLD interview, he said the regional southern African body (SADC) needs to take up the issue urgently. (26.06.2008)

Merkel Presses African Leaders to Use Influence on Zimbabwe

German Chancellor Angela Merkel has urged African leaders to take the lead and "use their influence" to find a solution to Zimbabwe's mounting political crisis and continuing violence. (26.06.2008)