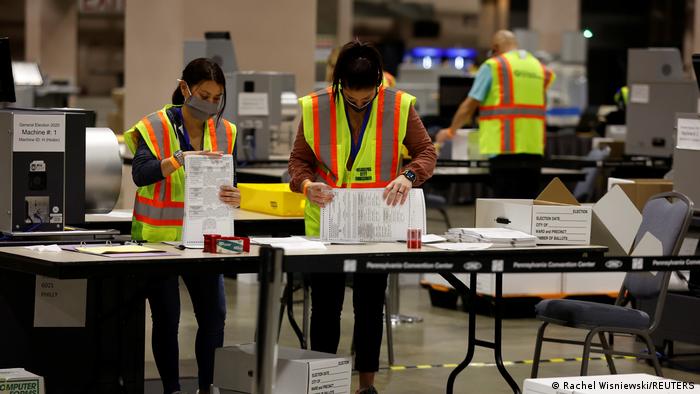 Top federal cybersecurity and state election officials rejected claims of fraud in the 2020 US presidential election, in a statement on Thursday. They said that the election "was the most secure in American history."

"There is no evidence that any voting system deleted or lost votes, changed votes or was in any way compromised," according to a joint statement issued by the Election Infrastructure Government Coordinating Council.

"While we know there are many unfounded claims and opportunities for misinformation about the process of our elections, we can assure you we have the utmost confidence in the security and integrity of our elections, and you should too," the statement said.

President Donald Trump has so far refused to concede defeat in the US election, despite officials saying they found no sign of serious irregularities or fraud.

Eurasia Group President Ian Bremmer told DW that although Trump is "completely within his legal rights" to launch lawsuits challenging the election, the legal cases being brought by his team are "frivolous" and "stupid."

"President Trump, he's lost the election, all the media's called it. There's no way, there is no evidence of fraud. Even if there was some level of fraud, it's inconceivable that it would raise to the number of votes we're talking about that would be able to swing the election," said Brenner, who specializes in global risk assessment.

Thursday's statement came as President-elect Joe Biden was projected to win the battleground state of Arizona, according to tallies from several US news networks. The Associated Press already projected Biden to win the state last week.

The win has widened the Electoral College lead for Biden, who has begun assembling his transition team for the White House.

The Trump administration has so far refused to coordinate with the Biden transition team. The federal agency in charge of allocating funds for the transition of power is also yet to recognize Biden as the winner. This blocks Biden's team from accessing information and intelligence briefings.

The remarks from US officials echo those of international election observers from the Organization for Security and Cooperation in Europe (OSCE). German lawmaker Michael Link, who led the OSCE observer team, told DW that the Trump team's allegations are "baseless" and that he is concerned about the US voting process.

"The biggest danger is that election results being counted by the states are not being recognized [...] The president elect will not get the necessary resources or intelligence that he needs in order to prepare for his taking of office, that is indeed a concern," German lawmaker Michael Link told DW.

Democrat lawmakers on Thursday urged their Republican counterparts to work together to pass legislation on the coronavirus pandemic and shore up the battered US economy.

US President Donald Trump shows no sign of conceding the presidential election. Instead, his supporters are making further allegations about irregularities. DW Fact Check examines the latest claims.