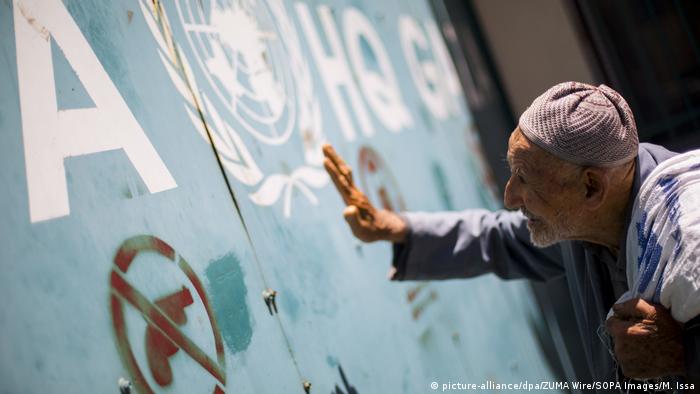 The US will cut all funding to the UN agency serving Palestinian refugees, the State Department said Friday, calling the organization that serves 5 million people "irredeemably flawed."

Washington will no longer make additional contributions because the United Nations Relief and Works Agency's (UNRWA) "endlessly and exponentially expanding community of entitled beneficiaries is simply unsustainable and has been in crisis mode for many years," State Department spokesperson Heather Nauert said in a statement.

The US is the largest donor to UNRWA, providing about 30 percent of its budget. Last year, Washington donated $355 million (€305 million) to UNRWA, but the Trump administration slashed its contribution, providing only $60 million this year.

Read more: US State Department cuts over $200 million in aid to Palestinians

In a series of tweets, UNRWA spokesperson Chris Gunnes said the decision was "surprising" since the US had renewed a funding agreement in December 2017, and rejected the notion that it was irredeemably flawed.

"We reject in the strongest possible terms the criticism that UNRWA's schools, health centers, and emergency assistance programs

Stephane Dujarric, a spokesman for UN Secretary General Antonio Guterres, said in a statement that the UN regretted the US decision.

"UNRWA has a strong record of providing high-quality education, health and other essential services, often in extremely difficult circumstances, to Palestine refugees who are in great need," the statement said.

Meanwhile, an official in Israeli Prime Minister Benjamin Netanyahu's office said on condition of anonymity that "Israel supports the US move," add that "consolidating the refugee status of Palestinians is one of the problems that perpetuates the conflict."

UNRWA has said it will struggle to provide services to about 5 million Palestinian refugees if a more than $200 million funding gap is not filled.

Germany, the Gulf Arab states and others have pledged to increase their donations, but it is unclear if it is enough to sustain all of UNRWA's services.

The UN agency was formed to provide services to Palestinians refugees displaced by the formation of Israel in 1948. It provides health care, education and social services  to Palestinians in Syria, Lebanon, Jordan, the West Bank and Gaza Strip.

The Trump administration is seeking to pressure the UN agency over how it defines Palestinian refugees. UNRWA includes the descendents of those displaced by Israel, something that the US wants to take off the table in any Israel-Palestine peace deal.

Palestinians have refused to engage with the Trump administration since the US recognized Jerusalem as Israel's capital earlier this year. Palestinians want East Jerusalem as the capital of any future independent state.

'Not part of the solution'

A spokesman for Palestinian President Mahmoud Abbas described the American move to cut UNRWA funding as the latest "flagrant assault" against Palestinian people.

"The consecutive American decisions represent a flagrant assault against the Palestinian people and a defiance of UN resolutions," said spokesman Nabil Abu Rdainah. "Such a punishment will not succeed in changing the fact that the United States no longer has a role in the region and that it is not a part of the solution."

Palestinians have long demanded a right to return to their homes as part of any Middle East peace agreement. It remains unclear what would happen to millions of stateless Palestinians in the region if UNRWA cut or redefined their refugee status.

"Trump's attempts to use coercive diplomacy will fail as long as he cannot mobilize an extensive supportive international alliance. On UNRWA he is clearly swimming upstream and almost alone," Ofer Zalzberg, the International Crisis Group's Senior Middle East Analyst, wrote on Twitter.

Among the UN's proposals for protecting Palestinians is a UN-mandated armed military presence. All of the proposals would need the cooperation of both Israelis and Palestinians, which could prove difficult to achieve. (18.08.2018)

For weeks, Palestinian incendiary kites have been setting fields in southern Israel ablaze. Last weekend, fierce violence broke out between Hamas and Israel. In Gaza, residents fear the consequences of full-scale war. (20.07.2018)