The US Senate has opened a review of planning and security failures leading up to the deadly assault on the US Capitol. Questions arose over apparent intelligence failures and a delay in requesting the National Guard. 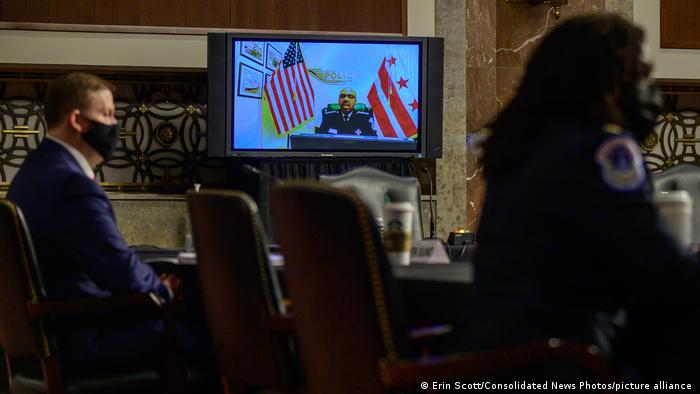 Also among those to give testimony was Robert Contee, the acting police chief in Washington DC

Two Senate committees were hearing evidence on Tuesday from the officials in charge of security when the US Congress was attacked by supporters of Donald Trump.

Some former security officials have blamed apparent intelligence shortcomings for the failure to anticipate the violence of the mob.

The invaders, intent on interrupting a session to certify Joe Biden's presidential election victory, smashed through the barriers at the perimeter.

Five people died as a result of the violence, including a Capitol Police officer and a woman whom police shot as she tried to smash through the doors of the House chamber with lawmakers still inside.

Trump was criticized and impeached over the insurrection — but not convicted by the Senate — for telling his supporters to "fight like hell" to overturn his election defeat.

What are senators trying to find out?

Senators from the Homeland Security Committee and the Committee on Rules and Administration are conducting a broad examination of security failures.

They are interviewing officials responsible for both security planning and the response to the storming.

Three of the four being interviewed on Tuesday resigned immediately after the attack.

Senators were expected to ask what was known in the run-up to the attack and how the information was shared.

Questions about the response relate to the apparent lack of preparation by Capitol Police and a delay in requesting help from the National Guard.

Whom were the panels speaking to?

Senators questioned the former chief of the US Capitol Police, Steven Sund, and the former sergeants-at-arms of the House of Representatives and Senate, Paul Irving and Michael Stenger.

In media interviews, Sund has blamed both sergeants-at-arms for not agreeing to his request for back-up from the National Guard ahead of January 6.

Also among those to give testimony was Robert Contee, the acting police chief in Washington, DC, whose forces helped the Capitol Police control the rioters.

What did the witnesses have to say?

House Sergeant-at-Arms Irving denied that authorities did not want the National Guard deployed at the US Capitol because it might look bad.

"'Optics' as portrayed in the media did not determine our security posture," Irving said. "We did discuss whether the intelligence warranted having troops at the Capitol, and our collective judgment at that time was: No — the intelligence did not warrant that."

Former Capitol Police Chief Sund contradicted Irving — his boss at the time — about the question of optics, saying he had requested National Guard troops. Sund said Irving had "stated he was concerned about the 'optics' of having National Guard present."

Sund said, however, that the invasion was not the result of poor planning but of failures from many agencies across the board.

What were the warning signs?

The Capitol Police's own intelligence unit had warned on January 3 that "Congress itself" could be the target of Trump supporters.

Can the US find unity?

The FBI also says it warned law enforcement agencies on January 5 that extremists were preparing to commit violence. However, it said, the warning was based largely on unconfirmed intelligence such as postings on social media.

A warning of a "war" on the Capitol was sent to the Capitol’s police intelligence division, the night before from the FBI field office in Norfolk. But Sund testified that he only found out about it the day before Tuesday’s hearing.

“No entity, including the FBI, provided any intelligence indicating that there would be a coordinated violent attack on the United States Capitol by thousands of well-equipped armed insurrectionists,'' he testified in a written statement about a conference call the day before the violence.

More than 200 people have been charged for their roles in the riot, including some who are linked to far-right fringe organizations such as the Oath Keepers and Proud Boys.

Donald Trump and his enablers are to blame for the mob that stormed the Capitol in Washington. The end of his time in power can't come soon enough, writes Ines Pohl.