US authorities have vetted all 25,000 National Guard members assigned to protect Biden's inauguration amid violence fears. The Pentagon has now removed 12 soldiers from duty. 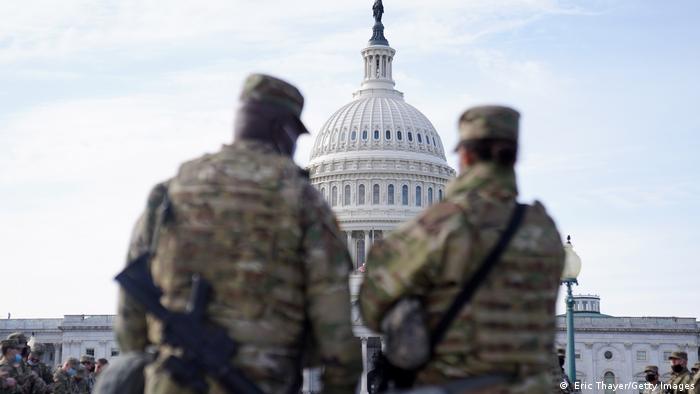 The US military pulled twelve US Army National Guard members from the presidential inauguration, officials said on Tuesday, claiming the reservists had been found to have ties with right-wing militia groups or to have posted extremist views online.

Washington is bracing for potential violence during Joe Biden's inauguration on Wednesday following the deadly riot on the Capitol by supporters of President Donald Trump. The city has been placed in virtual lockdown, with concrete blockades, barbed wire and up to 25,000 National Guard troops patrolling its streets.

Most of them are tasked with protecting a mostly inaccessible "red zone" around the White House and Capitol — where President-elect Joe Biden and Vice President-elect Kamala Harris will take their oaths of office.

US defense officials have been worried about a potential insider attack or other threat from service members in wake of the riots. In response to those concerns, the FBI had announced it would be conducting background checks on all the visiting National Guard troops to further identify potential security risks.

We "want to make sure that we have the right people in the security bubble," General William Walker, head of the National Guard in Washington, told US broadcaster Fox News on Monday. 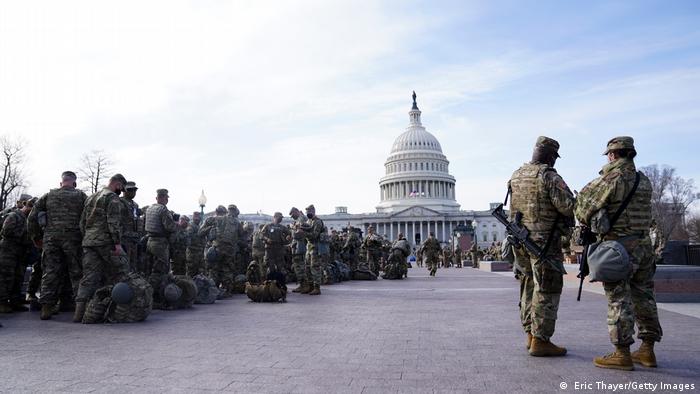 Up to 25,000 US National Guard members are patrolling Washington DC ahead of Joe Biden's inauguration

The suspect Guard members were sent home "out of an abundance of caution," Pentagon spokesperson Jonathan Hoffman said, noting that not all 12 of them were found to have extremist group ties.

One soldier was removed after troubling text messages were discovered and another guardsman had been reported to a tip line, Army General Daniel Hokanson, chief of the National Guard Bureau, told reporters.

The other 10 were flagged for various potential issues that may involve previous criminal activity but are not directly related to the inaugural event.

Acting Defense Secretary Christopher Miller said in a statement Monday that the Pentagon has found no intelligence so far that would indicate an insider threat and no active plots against Biden have been revealed.

In a separate story on Tuesday, a 20-year-old US Army soldier was arrested in Georgia on federal terrorism charges. Prosecutors believe he intended to assist the "Islamic State" group in conducting a deadly ambush on US troops.

Private Cole James Bridges was charged "with attempting to provide material support to a designated foreign terrorist organization and attempting to murder US military service members," the US Justice Department said in a statement. Bridges allegedly spoke online about plots to blow up New York City's 9/11 Memorial and other landmarks. He is scheduled to make an initial appearance in federal court on Thursday.