US calls for end to fighting in Yemen amid famine fears

US Secretary of State Mike Pompeo has said UN-led negotiations to end the civil war should begin next month. The nearly four-year-old conflict has claimed over 10,000 lives and pushed millions to the brink of starvation. 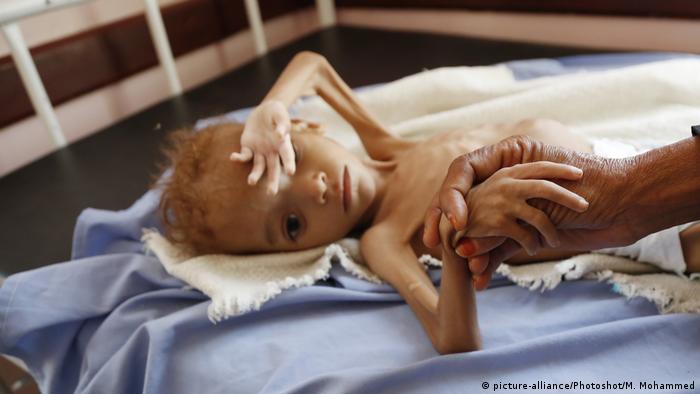 US Secretary of State Mike Pompeo on Tuesday called for a cessation of hostilities in Yemen, which has been ravaged by a nearly four-year civil war.

Pompeo said missile strikes by Iran-backed Houthi rebels against Saudi Arabia and the United Arab Emirates should stop. He also called on the Saudi-led coalition to stop airstrikes in all populated areas of Yemen.

The US helps the coalition by refueling its jets and providing training in targeting.

"The time is now for the cessation of hostilities, including missile and UAV (drone) strikes from Houthi-controlled areas into the Kingdom of Saudi Arabia and the United Arab Emirates," Pompeo said. "Subsequently, coalition airstrikes must cease in all populated areas in Yemen," he added.

The coalition has been fighting in Yemen since 2015 to reinstate President Abed Rabbo Mansour Hadi's internationally recognized government after Houthi rebels forced him into exile.

More than 10,000 people have been killed in the civil war that has pushed more than 8 million people to the brink of famine.

UN special envoy for Yemen Martin Griffiths said earlier this month that the world body hoped to resume consultations between the warring sides by November.

Mattis said on Tuesday the US had been watching the conflict "for long enough" and called for a ceasefire.

"We've got to move toward a peace effort here. And we can't say we're going to do it sometime in the future. We need to be doing this in the next 30 days," he said.

Mattis added that Saudi Arabia and the UAE appeared ready to embrace UN efforts to find a peaceful solution to the conflict.

A civil war between Houthi rebels and a Saudi-backed government has led to spiraling food prices. As ever more people face starvation, aid groups warn the crisis could trigger the world's worst famine in 100 years. (21.10.2018)