The Nazis "were keeping Jews from leaving the country," Jeff Sessions has claimed. Meanwhile, US President Trump doubled-down on false claims about rising crime in Germany due to immigration. 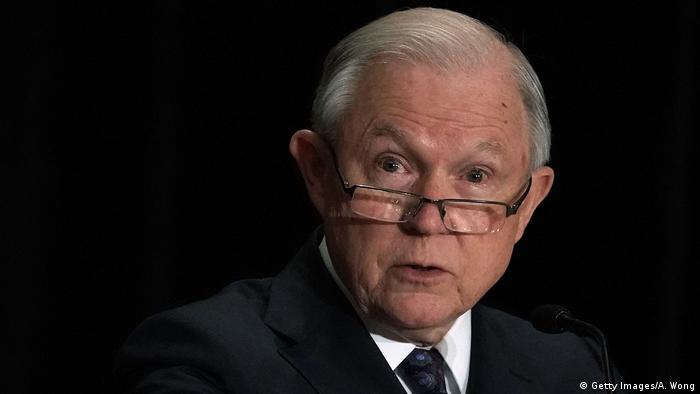 Thrice in two days has the administration of US President Donald Trump made misleading claims about Germany . Just a few hours after the president claimed that Germans were scared of immigrants and falsely stated that the crime rate in Germany had risen, Attorney General Jeff Sessions told an interviewer that the camps for migrant children at the US-Mexico border should not be compared to Nazi concentration camps because the Nazis  "were keeping the Jews from leaving the country."

Last week, the US Justice Department admitted that it had separated about 2,000 children from their parents at the US-Mexico border as part of a new policy to deter illegal immigration.

Authorities have defended the policy, saying that the adults escorting the children have committed a crime and must be taken into custody, as well as offering the unsubstantiated claim that criminal gang members bring minors with them across the border in order to be treated with more leniency by security services.

However, many lawmakers, including from Trump's own Republican party, have called on the Justice Department to end the policy.

The images of the children left behind in makeshift camps and in varying conditions has led many observers and even some politicians, including leading Senate Democrat Dianne Feinstein, to compare the practice to Nazi concentration camps.

Former CIA Director Michael Hayden tweeted a picture of Auschwitz last week with the comment: "Other governments have separated mothers and children." He later told CNN that he wanted "to grab people's attention" and warn them of the "commonality" between the current policy and what happened under Nazi Germany.

Jeff Sessions responded to these comparisons in an interview with Fox News' Laura Ingraham. "This is a real exaggeration," he said, "because in Nazi Germany they were keeping the Jews from leaving the country."

Sessions encouraged his critics to be "rational and thoughtful," about the situation, and reasserted that "we are taking care of these children. They are not being abused."

As has been well-documented, in late 1941 the Nazis began deporting millions of Jews from across Europe to death and concentration camps they had constructed across the continent.

Even Fox News' later reporting of the interview notes that Sessions was immediately criticized as being tone-deaf in his response.

The comments by Sessions came just one day after President Trump wrote on Twitter: "The people of Germany are turning against their leadership as migration is rocking the already tenuous Berlin coalition. Crime in Germany is way up. Big mistake made all over Europe in allowing millions of people in who have so strongly and violently changed their culture!"

As many have gone to lengths to point out, crime in Germany is currently at its lowest rate since 1992.

Not one to be deterred in the face of facts, Trump doubled-down on this claim on Tuesday:

While refugee crime has risen slightly with the increase in refugees, nearly all of these crimes are minor, such as not paying for a bus ticket. There is no data suggesting that people not born in Germany are more likely to commit crimes than those that are.