Union Berlin defeat Mönchengladbach in battle of the over-achievers

Table-toppers Gladbach and insurgent newcomers Union Berlin have done more than any to breathe life into the Bundesliga this season. Fittingly, their first ever league meeting produced a thriller. 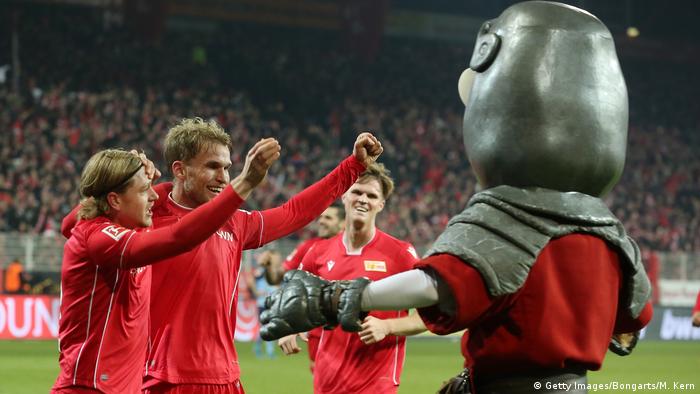 Before today, Gladbach had yet to face an opponent as difficult to predict, or as easy to underestimate, as Union Berlin. The other great over-achievers of the season so far, Union, have exceeded the expectations of both their opponents and their supporters. Three straight wins leading into this fixture, including a historic derby triumph and a first-ever away success in the top flight, ought to have dispelled any lingering doubts about whether or not Urs Fischer's side have what it takes to cut it at this level.

Still, Union Berlin had yet to face an opponent as dangerous as Gladbach. The Foals' powerful front three have been overwhelming defences all season, their well-organised back line snuffing out chances left and right, and their in-form keeper a reliable last resort when called upon. They arrived in Berlin having scored the third most and conceded the second fewest goals of any team in the league.

So it was a rare moment of vulnerability that left Yann Sommer picking the ball out of his net for the 12th time in the current campaign. Just minutes before, Patrick Herrmann had looked certain to send Gladbach in front when a sharp cross from Alassane Plea found him alone in front of goal. Union were saved by the base of the post, and three minutes later they were in front.

Anthony Ujah's opener, a simple back post header that Sommer was powerless to prevent, came from a rapid and ruthless counter-attack. One minute Gladbach were a few meters inside the Union half, in comfortable, if harmless, possession. The next, Union winger Marcus Ingvartsen had the ball at his feet, a wide and inviting expanse of pitch opening up in front of him. He galloped down the left and picked his striker out with an easy, well-placed cross. Ujah nodded the ball home, and the league leaders trailed.

There could have been plenty more goals before the break. In the 21st minute Ingvartsen, provider for the first, very nearly put his own name on the scoresheet, but his powerful edge-of-the-box drive rattled back off the post. Gladbach's chances came later in the half. Alassane Plea had the best of them when a through ball sent him charging into a one-on-one with Rafal Gikiewicz, but the keeper got a strong enough leg in the way of the shot to defend his side's lead. Gladbach might have been the best side so far this season, but at no point in this game was there a gulf between the teams.

The Alte Försterei is so intimate that it's almost claustrophobic, so loud that it's stifling. Union, playing at home for the first time since that unforgettable success against Hertha, were of course buoyed by the noise. Gladbach, on the other hand, were disorientated. Out-sung on the stands and out-manoeuvred on the pitch, the guests headed in at half-time looking shrunken, overwhelmed.

They were no better in the dark that had set in by the start of the second half. The last time they had to perform on a comparatively intimidating stage, a night match at Dortmund's Westfalenstadion, Gladbach came up short, and Saturday was a similar story. It seems that noise and night-time are two things that Marco Rose's side find it difficult to deal with. Gladbach struggled to make an impression in Berlin, and saw their lead at the top of the Bundesliga cut to a point.

Union failed to tire, Gladbach failed to threaten, and suddenly time was running out. The second-half produced only one really dangerous goalscoring opportunity, for the hosts, in extra-time, and true to today's implausibly romantic script, it was converted. Julian Ryerson, neatly played into space on the left wing by Christian Gentner, sent a low cross into the box towards Sebastian Andersson. Oscar Wendt's sliding intervention served only to take his own keeper out of the game, and with Sommer stranded, Andersson was left alone to head the ball into an empty net.

It doesn't take much of a departure from normality for followers of the Bundesliga, ever grateful when the top spot is occupied by anyone but Bayern, to declare that the division is, at last, interesting again. Union and Gladbach are the two over-achieving sides this season who have done more than any others to breathe some life into the league. How apt then for a meeting between these two clubs to end in a sensational victory for underdogs Union.

Despite the defeat, Gladbach stay top of the table tonight, and seem likely to defend their position until the winter break. But today was all about Union. It's four wins in a row now for Fischer's side, and the fortress Alte Försterei is becoming increasingly intimidating. As Dortmund found out, Hertha recently learned, and Gladbach now know, Köpenick is a very tricky place to play.