The United Nations refugee agency has reported a sharp rise in the number of people fleeing eastern Ukraine. Pro-Russian separatists control a number of key cities in the region. 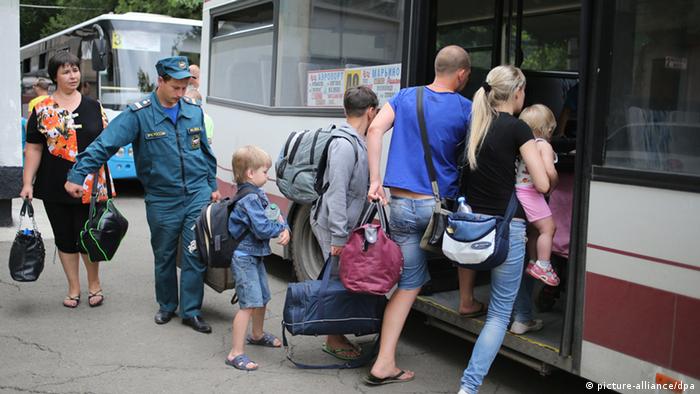 The office of the United Nations High Commissioner for Refugees said on Friday that an estimated 16,400 people had fled their homes in eastern Ukraine over the past week alone.

"We are seeing a sharp rise in (internal) displacement in Ukraine," Melissa Fleming the Geneva-based agency's spokesperson told a press conference.

She said this brought to 54,000 the number of people thought to have been displaced within the country since fighting broke out in the region earlier this year.

More than double that figure had fled the country for neighboring Russia she said, just 9,500 of whom had applied for refugee status. A few hundred others have gone to Poland, Belarus, the Czech Republic and Romania, Fleming said.

The UNHCR found that many of those on the move cited fears of being abducted as well as the generally deteriorating situation in the region as the main reasons for leaving.

Last week's spike in the number of people fleeing came despite a cease-fire declared by Ukrainian President Petro Poroshenko last Friday. One of the main pro-Russia separatist groups later agreed to observe the truce. The ceasefire has reduced but not completely stopped the fighting.

Russian President Vladimir Putin has called for the ceasefire to be extended beyond this Friday evening, when it is set to expire.

"Most important is the securing of a long-term ceasefire as a necessary condition for substantive talks between the authorities in Kyiv and representatives of the southeastern regions," Putin said during a diplomatic ceremony at the Kremlin on Friday.

Poroshenko has yet to say whether Kyiv will extend it.

The latest developments come just hours after pro-Russian separatists released four observers from the Organisation for Security and Cooperation in Europe (OSCE) that they had held for more than a month.

The observers from Switzerland, Turkey, Estonia and Denmark, part of a 100-strong mission, were brought by heavily armed rebels to a hotel in downtown Donetsk in the early hours of Friday.

Four other observers from the Vienna-based organization are still in rebel hands.

The leaders of Ukraine, Georgia and Moldova have signed deals with the EU designed to strengthen political and trade ties with the bloc. Russia's reaction was almost instant, and it wasn't a message of congratulation. (27.06.2014)