The leaders of Ukraine, Georgia and Moldova have signed deals with the EU designed to strengthen political and trade ties with the bloc. Russia's reaction was almost instant, and it wasn't a message of congratulation. 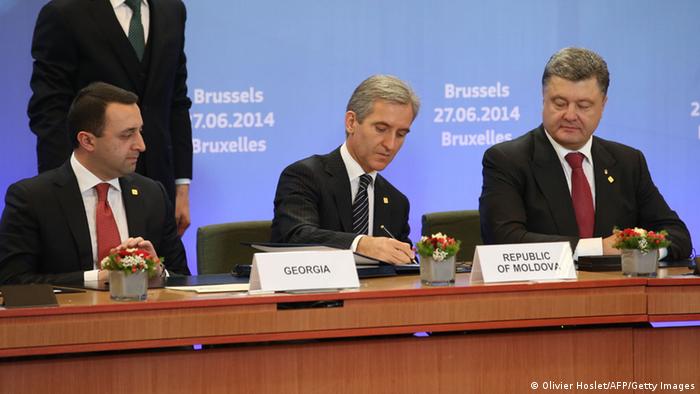 Ukrainian President Petro Poroshenko (pictured above, center) signed the association agreement with the European Union on the second day of a summit of the bloc's 28 leaders in Brussels on Thursday.

"I think this is one of the most historic days for my country after getting independence," Poroshenko told reporters as he arrived for the signing ceremony. "It's an absolutely new perspective for my country."

It was a decision by Kremlin-friendly former Ukrainian President Viktor Yanukovych late last year to balk at signing the agreements, that in part sparked the country's ongoing crisis.

The two other eastern European leaders who signed deals on behalf of their respective countries expressed similar sentiments to those of the new Ukrainian president.

"Moldova has made a choice and that choice is definitive: It is that of European integration," Moldova's Prime Minister Iurie Leanca said.

"Becoming a full member of the unified European family is Georgia's unwavering will," Georgian Prime Minister Irakli Garibashvili said, adding that it marked "the beginning of a great journey."

The president of the European Council Herman Van Rompuy described the signings as making Friday "a great day for Europe... the European Union stands by your side today more than ever before."

He also said that the accords contained "nothing that might harm Russia in any way" and that they offered all involved the opportunity "to chart together a safer future."

However, Russia, which has seen its influence in decline in much of eastern Europe through the expansion of the EU and the Western military alliance NATO in recent years, quickly expressed its disapproval of the agreements signed on Friday.

"The consequences of the signing by Ukraine and Moldova will certainly be serious," Deputy Foreign Minister Grigory Karasin was quoted as saying by Russia's Interfax news agency. He added however that "the signing of such a serious document is, of course, a sovereign right of any state."

With the signings completed, the 28 European heads of state and government were expected to get down to the business of trying to reach a consensus on who should be the next head of the European Commission.

By Friday morning it was looking increasingly like Jean-Claude Juncker would win their approval, with just British Prime Minister David Cameron and his Hungarian counterpart, Viktor Orban on the record as opposing the candidacy of the former premier of Luxembourg.

A summit of European leaders has kicked off in the Belgian town of Ypres. After commemorating the war dead, EU heads travel to Brussels to discuss who should be the next EU Commission president. (26.06.2014)

A treaty to launch the Eurasian Economic Union spanning Russia, Kazakhstan and Belarus has been signed by the countries' presidents in the Kazakh capital. The bloc will come into being next January. (29.05.2014)